The next Angry Birds game is another franchise tie-in, but this time the franchise is more than just a silly movie about birds.

Today Rovio announced it newest game is Angry Birds Star Wars, and it will come to iOS, Android, and desktop on November 8. The game will likely use the concepts introduced in Angry Birds Space like gravity, but with a Star Wars motif. That means birds with lightsabers fighting the evil Darth Piggie and his empire.

We don’t have any screenshots yet, but we do have a short video of a bird clad in Jedi robes holding a slingshot-shaped lightsaber.

Art for the game includes a wall paper with Angry Birds characters assuming the roles of Star Wars characters. The red bird plays the role of Luke Skywalker, while yellow bird assumes the role of Han Solo, giant red bird is Chewbacca, and white bird is C3P-0. The King Piggie of course plays Darth Vader.

We hope there’s more, however, because we find the image’s lack of the tiny blue bird disturbing. 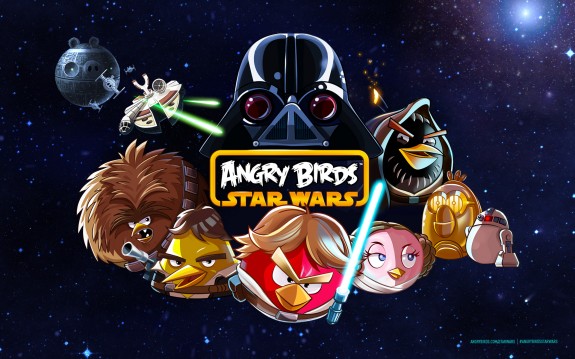 Angry Birds Star Wars will feature music from the movie franchise in addition to using Star Wars locations for the puzzles. We can’t wait to fling Skywalker birds at Alderaan or Kashyyk to save whatever role the eggs will take in the game.

According to Engadget Rovio also announced a line of merchandise to go along with the new game. That includes table games, toys, and costumes. We expect to see a big push behind this game a related merchandise because if there’s one thing George Lucas always needs, it’s more money.