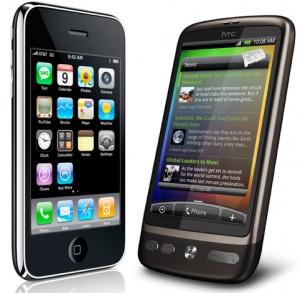 The recent ITC ruling that Apple had won against rival smartphone-maker HTC can have market implications against other manufacturers of Android devices because of the broad nature of the patents in question.

The two patents that HTC had violated include 5,946,647, “System and method for performing an action on a structure in computer-generated data” and 6,343,263, “Real-time signal processing system for serially transmitted data.”

In-depth analysis of these patents suggest that HTC itself may not have violated Apple’s patent rights, but that the violator may in fact be Google with its Android OS. If this is true, a ruling against HTC may set precedent for future rulings against other Android manufacturers.

For example, the first patent in question relates to how an OS detects contact information and generates a link based on that information. Clicking on a link will perform a specific action based on the context of the generated link, such as dialing a phone number or opening up an email app with the ‘to’ field pre-populated with the email address if it’s an email address. This action isn’t specific to HTC nor its HTC Sense implementation, but is found on all Android handsets via the ‘Linkify’ functionality.

Given that the ITC has the power to block violating products from being sold in the U.S., a successful ban against HTC and other Android manufacturers can stagnate Google’s impressive Android growth.

Though HTC says that it has a workaround for the second patent violation, examination of the patent by Florian Mueller of FOSS Patents suggest that it’s much harder to work around and that real time signal processing is found in the underlying Android architecture, if not the Linux kernel itself.