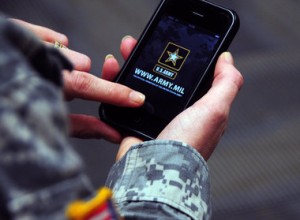 The army is ready to begin testing smartphones and tablets running Apple’s iOS operating system and also Google’s Android OS next week to see if the devices and apps fit the rigid military standards during real-life combat situations in war. If testing is successful, a $400-$700 smartphone could potentially replace more expensive and bulkier equipment, be easier to manage and update, and could help troops out in various situations.

Late last month, our own Kevin Purcell wrote an interesting editorial on why the increasing adoption of Apple equipment by governments and businesses may adversely affect consumers.

For comparison, if you look at the slow migration of notebook computers away from legacy VGA ports, you’ll understand that at larger scales, businesses and government users may not be willing to forgo trusted legacy features as there is already heavy investment in accessories–think of monitors, projectors, and other displays that rely on the now ubiquitous VGA port despite the migration of consumer notebooks to display technologies based on HDMI and Display Port, for example. However, in the case of the U.S. Army adopting smartphone technology for combat, I think we may begin to see some some innovative technologies developed by the Army that can be ported for consumer use and see more secure phones in the future.

Having already invested $4.2 million in research smartphone and apps, the military can potentially influence and help shape the direction of phones, both in the consumer and enterprise space. For instance, the Wall Street Journal is reporting that the army is researching biometrics security that could potentially be used to lock up and secure phones used by consumers and enterprise users. For war purposes, biometrics security would be used to identify enemies and suspected insurgents, but for consumers the technology can identify a smartphone owner, much like how Motorola is beginning to implement it through the fingerprint scanner on the Atrix 4G.

Biometrics—where the photos, fingerprints and iris scans are used to verify a person’s identity—are another possible application for a military smartphone. The military already uses portable biometric collection kits to identify suspected insurgents in Iraq and Afghanistan, but a downloadable phone app would, the thinking goes, put that kind of tool in the hands of more soldiers.

Other apps include a medical help app where soldiers can tap on the screen and transmit their GPS location to signal for a medic or medical help if they are wounded in combat. An augmented reality app would also help soldiers new to the terrain learn about it without having to carry more bulky maps or equipment, and smartphones can help the army view remote surveillance videos.

In the tough desert terrain, the army’s involvement with smartphones can also yield positive vertical results, affecting other factors such as mobile traffic data and its effects on cellular network. The army will probably need to compress data as much as possible to transmit them quickly and efficiently in battle, and those lessons learned can help consumer apps for streaming videos, music, and for downloading digital content, for example.