While all four press conferences on the first day of E3 featured racing games for consoles, mobile gamers now have their own car game to drool over: Asphalt 8 from Gameloft.

The latest entry into Gameloft’s popular franchise Asphalt 8 will let players drive a variety of cars through racetracks across the globe. The game will feature eight entirely new maps including tracks in the Nevada desert and the streets of London. The popular Monaco track from Asphalt 7 will also return with a few changes.

Asphalt 8 will introduce new weather effects across all tracks including rain, ice, snow and dust. To use Gameloft’s examples, players will hydroplane across puddles after a huge rain storm in Tokyo or slide across ice in the frigid streets of Finland.

Like previous games in the series, Asphalt 8 tracks will have several shortcuts scattered throughout so the weather effects may help players stumble upon faster routes through the race.

Gameloft built a brand new physics engine for Asphalt 8 to give players even more control over their virtual cars. The engine also lets players perform more stunts and tricks off the ramps placed strategically in each track. 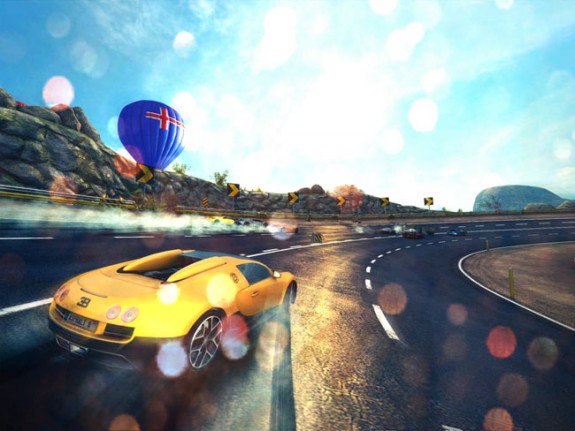 Players will have the chance to compete with friends at the same time or asynchronously at any time with Asphalt 8. The game will also feature a variety of special modes including the popular Takedown mode Asphalt 7 borrowed from the Burnout series.

The new racing game will add two modes: Gate Drift and Infected. Gate Drift makes players drift through gates on a track to get points. Infected is essentially a game of tag where the infected player does their best to infect other cars in a race before the infection depletes their health.

Asphalt 8 will come to iOS and Android sometime this summer for $0.99. It may not look as great as Forza Motorsport 5 or Drive Club, but it still looks very impressive for a mobile game and is likely just as fun as the previous titles in the series.