The next game in the long-running Assassin’s Creed series is official and you won’t have to wait long to travel to Ancient Greece on your Xbox One, PlayStation 4, or Windows PC.

While most games come with one or two different versions, Assassin’s Creed Odyssey comes in five different flavors. There’s the standard version of the game, the Deluxe Edition, the Gold Steelbook Edition, the Ultimate Edition, the Spartan Collector Edition, and the Pantheon Edition.

Each edition comes with a different price point and a unique collection of items. Some of these are in-game bonuses while others are real life collectibles.

Some of you might be thinking about putting in a pre-order ahead of the game’s release date. If you do decide to pre-order, you’ll want to make sure you purchase the right version.

The standard edition retails for $60, but you might be able to find a deal ahead of the game’s release date. Best Buy is offering $10 in rewards to those who pre-order.

This version of the game comes with the least amount of items, but it’s the safest way to buy the game. You should buy the Standard Edition if: 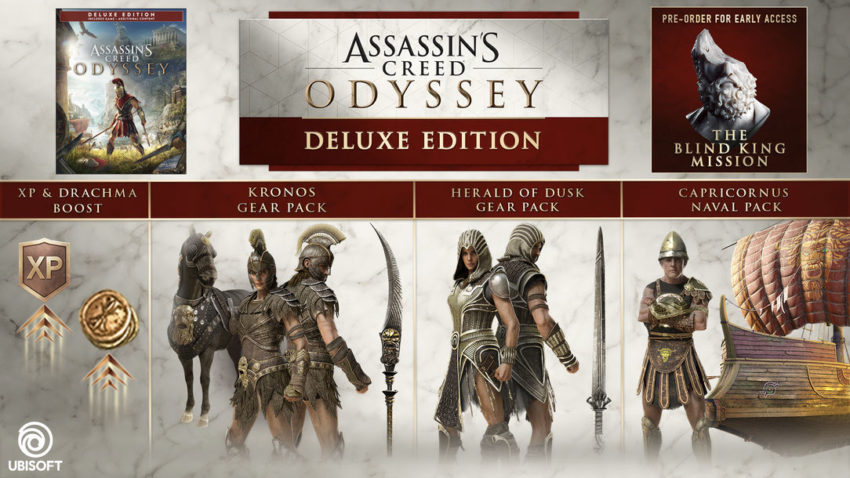 The Deluxe Edition comes with The Blind King pre-order bonus and some additional items including an XP and Drachma boost, a Kronos gear pack, Herald of Dust Gear Pack, and the Capricornus Naval Gear Pack.

The Deluxe Edition is $20 more expensive than the standard version so you’ll need to decide if these bonuses are worth the $20 extra. For many of you, they aren’t. You should only buy this edition if:

The next step up is Assassin’s Creed Odyssey’s Gold Steelbook Edition. It retails for $120 so you’ll want to be absolutely sure it’s worth it before you buy it.

The Gold Steelbook Edition comes with, you guessed it, a gold steelbook case for the game. It also comes with the game’s Season Pass and a bonus mission called the Secrets of Greece.

On top of those perks, you’ll also get an earlier release date than those who pre-order the standard and Deluxe versions of the game. If you pre-order the Gold Steelbook Edition, you get access to the game on October 2nd instead of October 5th.

You should only buy this $100 version of the game if:

There’s also the Ultimate Edition which is a little bit different than the Gold Edition. It also appears to be an exclusive for the Windows PC.

The Ultimate Edition includes the early release date on October 2nd, all of the bonus items from the Deluxe Edition (outfits, boosts), the Season Pass, and the bonus mission Secrets of Greece.

If that sounds like something you want, prepare to spend $120 without a deal. You should buy this version of the game if you:

If you’ve got some money to burn and you’re a huge fan of the Assassin’s Creed series, you should take a look at the Spartan Collector Edition. 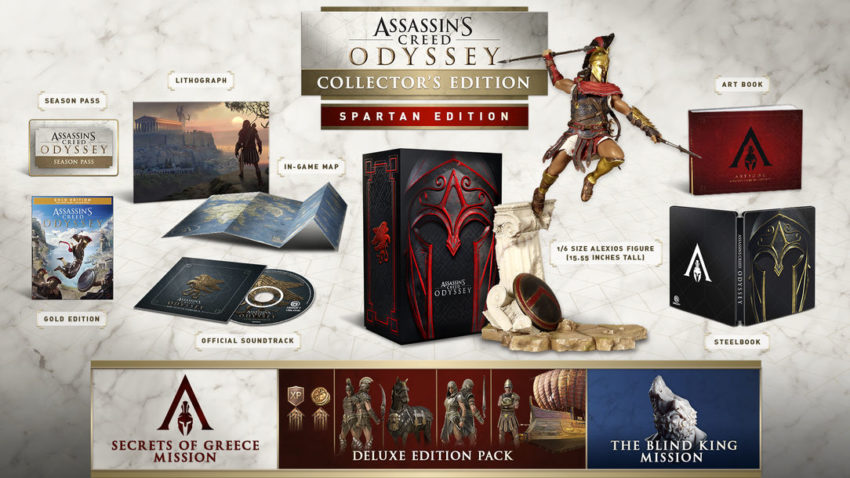 This $160 bundle comes with some of the components from the other editions including the early release date, the Secrets of Greece mission, the Season Pass, and the bonus items from the Deluxe Edition. It also comes with some real life collectibles.

These collectible items include an art book, a game map, a lithograph, the official soundtrack, a unique steelbook case, and a 1/6 size Alexios figure. The figure is 15.55 inches tall.

You should pre-order this version of the game if:

And finally, for those unafraid of spending $220, there’s the Pantheon Edition.

The Pantheon Edition includes everything in the Spartan Collectors Edition plus an additional figure. The figure is an enemy and it stands 11.22 inches tall. It also comes in a huge collector’s box.

The only people who should buy this edition are collectors who are huge fans of the series.

You’ll also need to decide between buying a physical copy or a digital version of the game.

If you buy the physical version of the game, you’ll be able to sell it to a retailer like GameStop for credit toward another game once you finish it. You’ll also be able to get rid of it for cash on resale sites like eBay and Craigslist.

If you buy the physical version you’ll be able to easily lend the game to someone else once your done or if that person wants to try before they buy.

If you go with a digital copy you’ll avoid having to find the disc every time you want to play.

You’ll also cut down on the clutter around your entertainment center, avoid potential damage to a disc, and you’ll never have to worry about misplacing the game.

If you pre-order a digital copy you’ll also be able to pre-load the game before its release date. Pre-loading will allow you to play as soon as the game goes live on release day.

Games typically go live at 9PM Pacific, 12AM Eastern on release day. Check the game’s product page for the exact release date and time in your region.