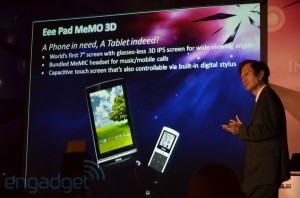 It looks like Asus is breathing new life into the Asus Eee Pad MeMO, a tabletphone combo with a Bluetooth dongle to route calls and control parts of the Android Honeycomb slate on the go while the tablet’s safely stowed in a bag, as the company has announced a MeMO with a glasses-free 3D display at the Computex trade show. The refreshed model will be dubbed the Eee Pad MeMO 3D.

The 7-inch slate comes with an unusually high pixel count for its size. Traditionally, slates of that size, including the 7-inch Galaxy Tab and the HTC Flyer, come with 1,024 X 600 pixels, but Asus is cramming a whopping 1,280 X 800 pixels into this display, a resolution more common on 10-inch slates like the Xoom and the Asus Eee Pad Transformer. However, given that the 7-inch Iconia Tab from Acer has been delayed due to compatibility issues with the smaller display on Honeycomb, perhaps Asus is being smart by making the resolution similar to the 10-inch Honeycomb slates of today to ensure app compatibility at this early stage.

The Eee Pad 3D will come with the MeMIC dongle in the box, rather than as an optional accessory.

Pricing and availability information is forthcoming.