Asus is kicking off the first big pre CES 2011 press conference and I’m sure we’ll hear tons more from them as well as others over the next few days. But this looks like an interesting and potentially innovative entry into the Tablet race. The Eee Pad MeMO has a 7 inch screen, a smart stylus that works on a pressure sensitive screen that has a resolution of 1024 x 600. And yeah it will be running that new and exciting Tablet friendly version of Android that won’t be ready for awhile yet.

It does also have phone capability but Asus is including something they call the MeMic. You might call it a Bluetooth headset and probably be pretty close. The Eee Pad MeMO has a dual core Qualcomm 8260 processor to power the things up, multiple cameras, and comes with Apps tailor made for the device from Asus. No word on pricing, release date, etc… you know the important stuff. 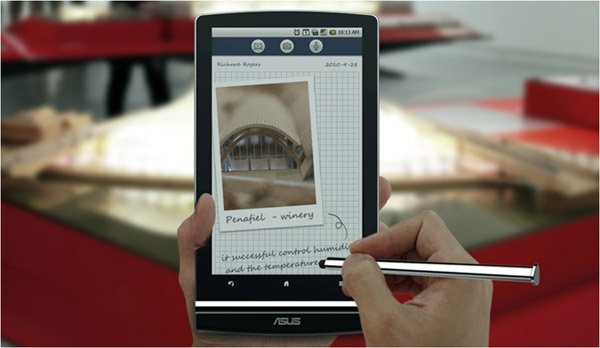