We have been due for a massive carrier road map leak and today, an extensive 2011 AT&T smartphone road map has leaked out courtesy of Pocketnow show casing a bunch of upcoming Android devices, two Windows Phone 7.5 Mango handsets and some BlackBerry 7 devices as well.

So let’s run down the leak, shall we? First up we have a pair of Windows Phone Mango handsets, the Samsung Kupua i937 and the HTC Bunyip. Both are due out in Q4, have big batteries and possess 512MB of RAM. They also both have 1600+ mAh batteries. The Bunyip is likely either the HTC Omega or HTC Eternity that we expect to see on September 1st. 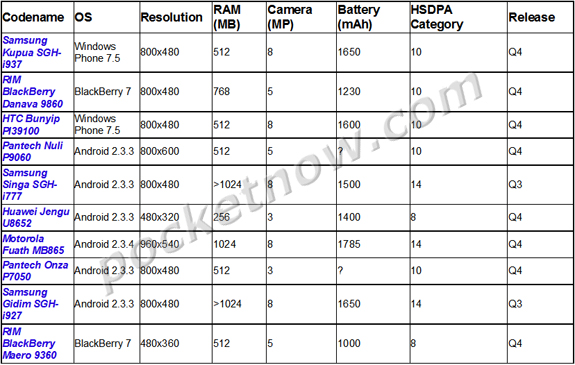 As for Android, well, let’s just say there is a lot here. Every single phone listed here is going to be launching with Android Gingerbread at the very least and there are two standouts among the bunch.

The first, the Samsung i777 which is the Galaxy S II Attain. It’s scheduled to be out in Q3 which means we should see it arrive in September along with the other U.S. bound Galaxy S II phones. In addition, we also see the Motorola MB865 aka the Atrix 2 which may or may not be a 4G LTE device. If it is, it may join the Samsung Impulse 4G on AT&T’s next generation network.

So, some exciting releases coming up to be sure. Which ones stand out to you guys?