Each and every year Black Friday seems to start a little earlier than the year before. And while some are already lining up at Best Buy for deals this Friday, Samsung has plenty available online.

This week Samsung officially posted their entire lineup for 2016. Those looking to get a smartwatch, discounted smartphones or the newest 4K HD TV will want to read on below. Of course our focus is mobile, but that’s just a few of many discounts to be found this year.

Samsung’s Black Friday page is loaded with deals. So much in fact, that you’ll have to hit “load more” over and over before getting to the good stuff. The first few pages are all Televisions. That said, the company has discounts on mobile, wearables, home entertainment, appliances, mobile accessories and everything else in-between.

Before we begin, it’s worth noting that some of the Samsung deals will be available starting on November 18th. Meaning don’t wait for Black Friday. Keep an eye on the page linked to above so you don’t miss out.

Are you ready? Here are some of the best deals we’ve spotted. At least in terms of mobile devices. Tablets are at heavy discounts too, but most of them are low-end tablets. Not the Galaxy Tab Pro.

As many buyers probably know, the Gear S3 smartwatch is brand new. Some are still waiting for pre-orders or Best Buy to have more stock. Getting it for $50 off is absolutely worth it. Side note, the Gear S3 supports Samsung Pay.

Alternatively, Samsung has a bunch of deals on old phones from yesteryear. Like a pre-owned Galaxy Note 3 for $249. That’s an old phone, one which won’t see updates and is used. Other deals include the Galaxy Note 4, Galaxy Tab A/E and even the Galaxy S6. If you do decide on an older used device, the Galaxy S6 is the best choice.

Of course what would Samsung deals be without huge discounts on HDTV’s. Some are over $3,000 off, and there are multiple over $1,000-$1,500 off as well. Rather than waiting in line at Walmart, check out the list below. 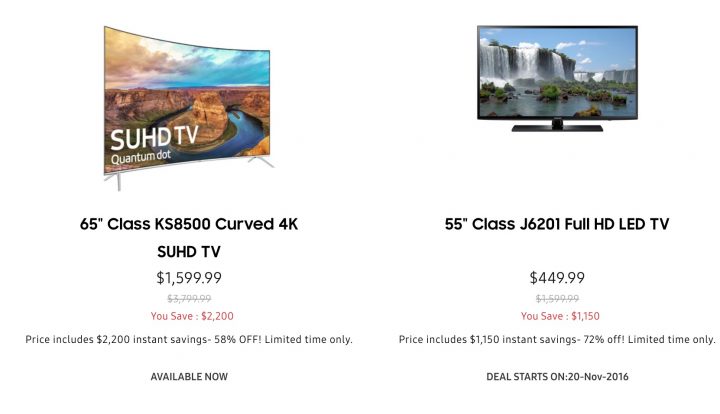 Everything else from Sound Bars to receivers and Bluetooth speakers have heavy discounts. Their website states that most deals will begin November 20th. So check online for more details when the time comes.

In closing, those who’ve been considering the Gear S3 or have it on pre-order, cancel it and save $50 in a few days from Samsung. Inventory will be limited so hurry while supplies last. Drop us a comment below with your favorite deals, or what you’ll be buying this year. For any and all deals check out our Black Friday Deals Portal.