Samsung is quickly showing that it can create new experiences and user experiences with eye-tracking and smart sensing technologies that were showcased on the Galaxy S4 flagship smartphone, but the next wave of Samsung innovation may bring the sensing to your mind through brain control. Originally conceived of as a way for users with mobility impairments to interact with and use a mobile phone or tablet, the technology can also be used by consumers to operate a phone or tablet in new ways.

And while Samsung’s eye tracking techology–like scrolling through a web page by moving your head or tilting your Galaxy S4 phone–may be deemed as a gimmick by some, brain sensing can be more useful for those with physical handicaps and in more broader settings as well.

The South Korean smartphone-maker has partnered with University of Texas, Dallas professor Roozbeh Jafari on the technology, which is described as still no where near prototype mode but the aim is that in the future, you can check your email or call a friend just by thinking it without even having to lift a finger. Researchers are trying to map brain signals with EEG 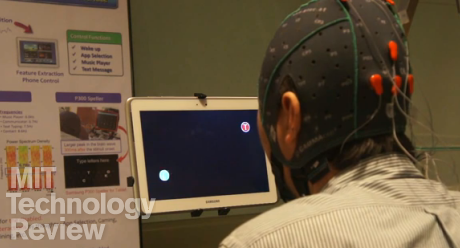 According to MIT’s Technology Review, here’s how the technology will work:

To use EEG-detected brain signals to control a smartphone, the Samsung and UT Dallas researchers monitored well-known brain activity patterns that occur when people are shown repetitive visual patterns. In their demonstration, the researchers found that people could launch an application and make selections within it by concentrating on an icon that was blinking at a distinctive frequency.

Another key advantage of brain control is that Samsung, which is championing larger smartphones and phablets, may someday be able to create smaller devices with expanded feature sets.

For now, the technology still has a long way to go, but it will definitely help Samsung move beyond its aptly named ‘TouchWiz’ user interface for a future lineup of Galaxy S smartphones and tablets.