Next week Apple will announce the new iPad, and potentially release it just a few days later. Typically with new devices, you’d have to wait for new cases to arrive. This time though, it looks like you won’t have to wait. Some manufacturers already have their iPad 3 cases ready for the launch, they just need to wait for the official announcement.

We know of at least three case makers that already have cases ready for the new iPad 3, even without an official announcement from Apple. These manufacturers must have seen the same leaks we’ve seen about the new iPad. Or they somehow managed to get a glimpse of the tablet as it made its way off the production lines.

Two of those case makers are Skech and Otterbox, both of which sent out emails about the next iPad recently. 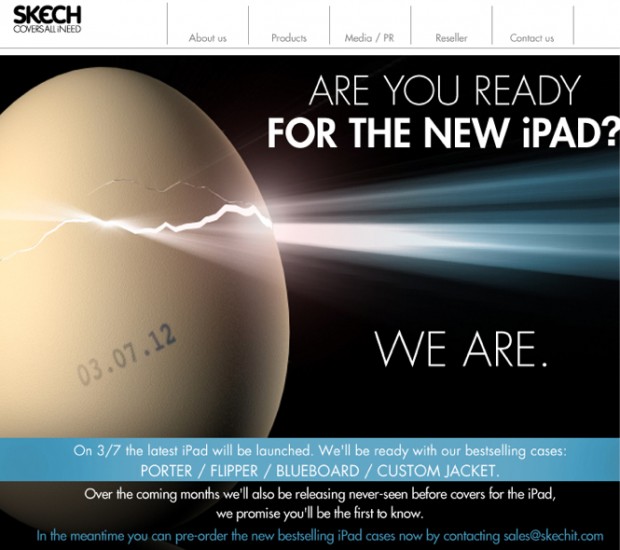 Those four varieties are the Porter, Flipper, Blueboard, and Custom Jacket cases. The case maker also promises “never-before seen covers for the iPad” coming over the next few months.

The last manufacturer we heard from is a major case maker which we cannot name here. We were told that the case maker has iPad 3 cases sitting in a warehouse awaiting the official launch on March 7.

The warehouse even has stickers to put on the cases in case Apple announces the iPad 2S instead of the iPad 3. No word on if there’s stickers made for an iPad HD. announcement, however.

Based on what we’ve heard of the iPad 3 so far, if you have a Smart Cover for the iPad 2 it will probably still fit the new version.

Other cases might not, however. That 1mm of extra thickness could cause a problem in some snug cases,and the larger camera hole could cause issues.

So it’s a good thing that case makers already have the iPad 3 cases made and ready to go. That’s assuming we know the true specs and measurements, and these manufacturers certainly think they do.