A new season of challenges and rewards are available in Clash of Clans. The prize for completing the May season is an all-new silver and blue armor-clad Gladiator skin for the Archer Queen. Here’s what you need to know about the Clash of Clans May season and how to get the latest skin.

For those unaware, the April Clash of Clans update delivered some massive changes to the game. Those include bug fixes, faster troop and building times, quicker hero regeneration, and new monthly season challenges with extremely lucrative rewards.

If you paid for the silver or gold tier in April you’ll get all of your rewards on May 1st. When I signed in I had over 14 million Elixir and even more gold, with all of my storages and collectors completely full. Basically, get ready to start some upgrades.

How to Get the Gladiator Queen Skin in Clash of Clans

After seeing the image above you probably have one question, “how can I unlock the Gladiator Queen?” and we don’t blame you, it looks epic. Unfortunately, you can’t just enjoy all of those monthly rewards and the new King and Queen skins for free. Instead, you have to pay $4.99 each month to participate in the “season” and if you play enough, hard enough, and complete all the tasks you’ll unlock the new skin.

The Gladiator Queen skin is only available to players who purchase the Gold Pass, which is $4.99 in-game. You’ll have to reach the final tier and earn 2,600 challenge points to unlock the skin. 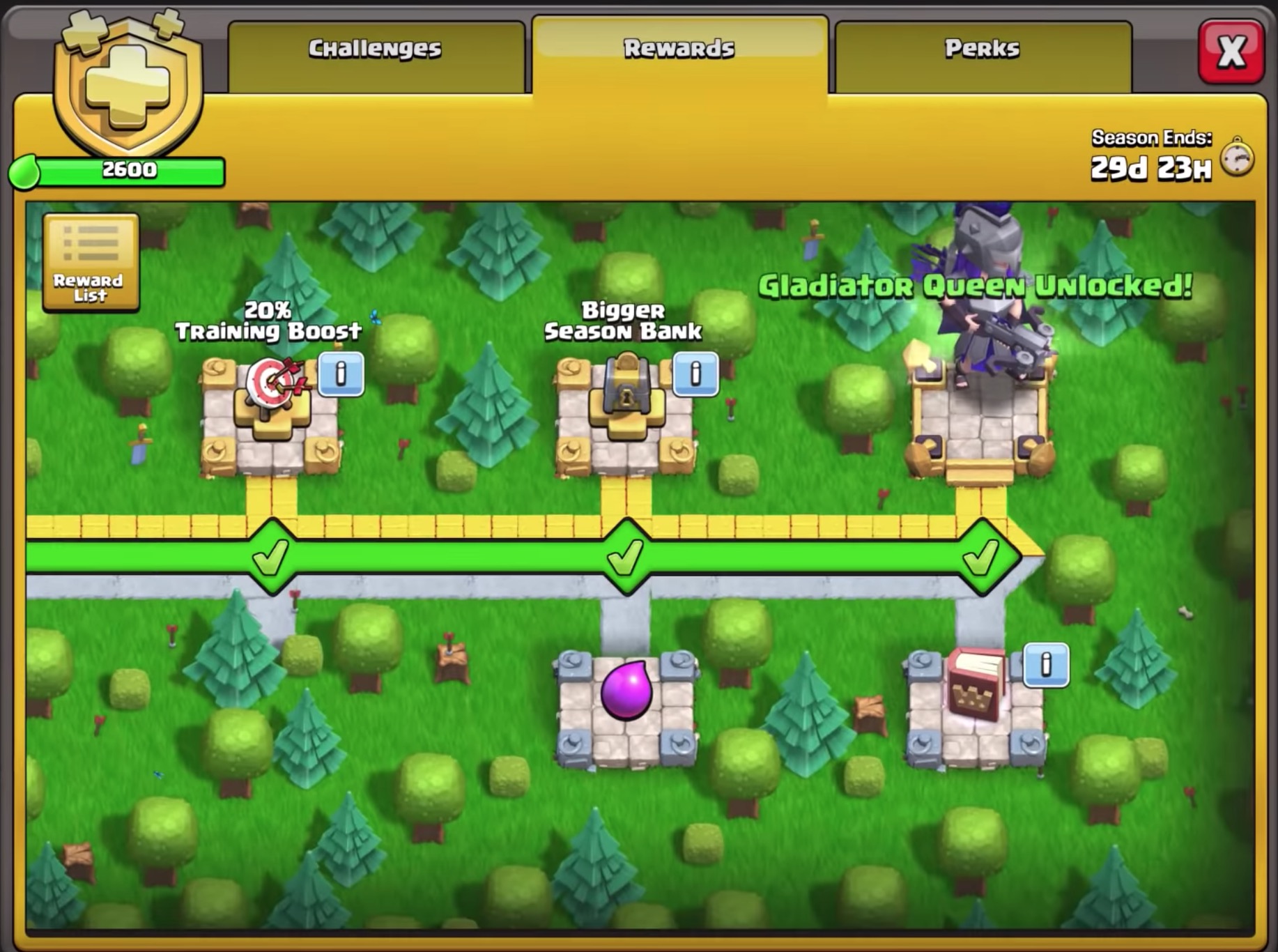 However, along the way, you’ll get a TON of great stuff for that $5 bucks. Some of the rewards include a bigger bank, tons of gold, runes of gold, elixir or dark elixir that fill storage 100%, training and resource boosts, special magic items you can use in battles or war, and much more. Plus, paying for Gold unlocks the season bank so you can hold all this goodness and have time to spend all the elixir you’re about to earn. 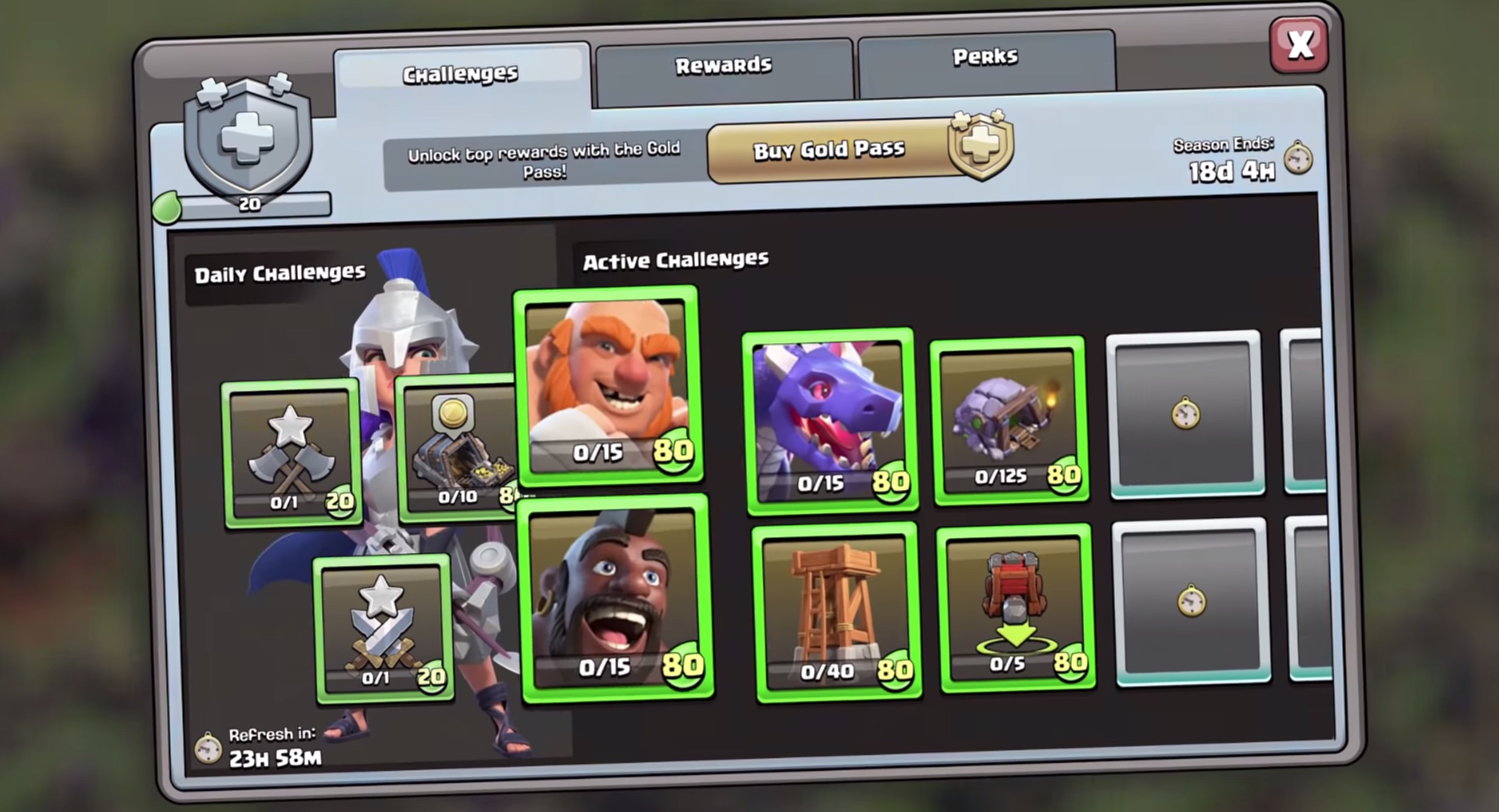 As you can see the May season challenges in Clash of Clans start off pretty easy. However, the more you progress and the closer you get to unlocking the Gladiator skin, the more difficult they become. We can’t tell you what to expect yet, as the quests refresh every 24 hours. That said, it is May, and you have a full 31 days to complete all the challenges.

Silver Tier in Clash of Clans

Keep in mind that you can play as you regularly do throughout the month and eventually unlock the Silver Pass, which still rewards you plenty of goodies, gold, and more. Then, if you decide later this month that you’re making great progress and want to get the Queen, you can.

Players can pay for the Gold Pass at any point throughout the month and will receive all of the rewards and bonus unlocks you’ve reached so far. Then, collect all the gold or magic potions and use them to finish the month and earn the Gladiator Queen.

When Does the Season End (And More Details)

As a reminder, the Clash of Clans May season lasts the entire month, which should be pretty self-explanatory. You have a full 31 days to complete everything, buy the gold pass, and reap the benefits come June 1st. At that point, we’ll get a special new Grand Warden skin, which we’re excited to see.

For now, enjoy the new season full of rewards and stay tuned for more information about the Clash of Clans summer update and Builder Hall 9, which is still coming soon. In closing, if you’re still dealing with problems from the Spring update here’s our guide of common Clash problems and how to fix them.