The Samsung Galaxy S10 release is only a few months away, and that means leaks, rumors and news are at an all-time high. We’re expecting big things and major changes from Samsung in 2019, including three Galaxy S10 models and a bigger S10 Plus with six cameras.

However, one huge part of the Galaxy S10 and Galaxy S10+ design is rather controversial, leaving fans and potential buyers worried. That, of course, is the cutout in the screen for the front-facing camera.

We’ve received tons of exciting information and rumors over the last few weeks. As a result, popular leakers and concept image creators are bringing all the latest Galaxy S10 rumors to life. Turning small bits of information into a stunning reality. 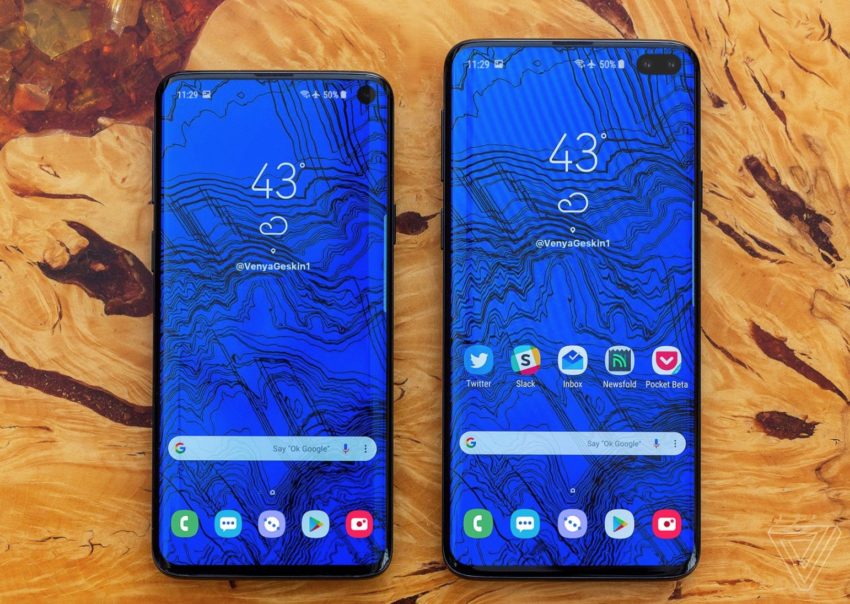 And while none of these photos are 100% accurate, or shots of the real phones, they are an excellent look at what to expect from the Galaxy S10 and Galaxy S10+ in early 2019. Remember, these are fan-made concept images based on leaks, rumors, or come from information received from accessory manufacturers.

While most photos are made by fans, the images by @Onleaks come from reliable info and dimensions Samsung gives to case and screen protector accessory makers. Basically, his images are usually the closest to the real thing, and he has a track record of releasing true-to-life imagery of phones months before they’re announced or released.

Don’t call it a notch! Lending credence to all of these rumors and leaked images, the highly reliable leakster who frequently shares Samsung details posted this on Twitter.

His tweet shows the bigger 6.4-inch edge-to-edge display of the Samsung Galaxy S10+. We can clearly see screen protectors made by accessory manufacturers, who obviously don’t want to waste money making accessories if the design isn’t final. Basically, this could totally be the Galaxy S10 Plus, guys.

We’re seeing a huge screen, tiny bezels (the black bars at the top and the bottom) and a tiny speaker grill shoved into the top that blends into the glass of the screen and the metal of the phone body. Then, of course, is the controversial cutout in the screen for the dual front-facing cameras. If this is correct, Samsung’s bigger phone will pack six cameras total — four on the rear and two on the front.

So, Samsung will likely release at least three different Galaxy S10 models, according to rumors. The Wall Street Journal and other sources in late 2018 confirmed a flat budget Galaxy S10, then a regular Galaxy S10 and Galaxy S10+ with curved screens. However, later another leak said a fourth 6.9-inch Galaxy S10 5G is coming with at least six cameras and a few other crazy features.

It looks like Samsung will target an early February launch event, potentially around February 6th to unveil the Galaxy S10 family of phones. Then, we’re expecting a March 15th Galaxy S10 release date around the globe. Again, that’s only a guess.

Hit the link above or our slideshow below for everything we know so far about the Galaxy S10, and stay tuned for more details. We’ll continuously update this post with more fan-made, concept, or real photos as they arrive.