We got a chance to play with the recently announced T-Mobile Springboard tablet, an Android 3.2 Honeycomb tablet made by Huawei, at CTIA last week in San Diego, California. The tablet, which can be summed up to have a design that marries the best of the iPad’s aesthetic alongside with cues from the HTC Flyer, is said to be a more affordable tablet option while at the same time offering some premium specs. 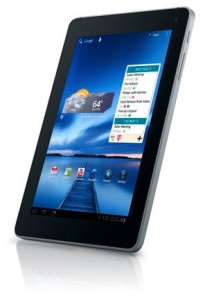 The front and sides of the Springboard reminds me a lot about Apple’s industrial design with elements from the original iPad and the iPhone 4. The unibody construction is a cross between Apple’s and HTC’s design as the back has plastic inserts at the top and bottom that are removable, just like they are on HTC’s Flyer.

Unlike the Flyer’s 7-inch display, however, the T-Mobile Springboard features a higher resolution display that’s more typical on 10-inch tablets. At 1280 X 800 pixels, the 7-inch screen on the Springboard is sharper than the Flyer’s 1024 X 600 pixels.

The carrier still has not announced the price of its budget-friendly Springboard tablet. For now, Huawei representatives say that we can expect to be pleasantly surprised. The Springboard’s price will probably be more affordable with a two-year contract with T-Mobile USA’s 4G HSPA+ network.