At the CTIA trade show in San Diego, California, Sprint had a Lapdock 100 on display that’s compatible with the Webtop-enabled Motorola Photon 4G Android smartphone. The Lapdock, when connected to the Photon 4G’s micro USB and HDMI ports, brings out the Webtop environment, allowing users to experience their smartphones on a larger, laptop-like display, full QWERTY keyboard, and extended battery. The concept is similar to the Lapdock that’s currently available for the original AT&T Atrix 4G as well as Verizon’s Droid Bionic.

Rather than a custom mount for the phone on the back like Lapdocks of yore, the new Lapdock 100 makes due with a more generic slot that any new Webtop-enabled smartphone can fit into. 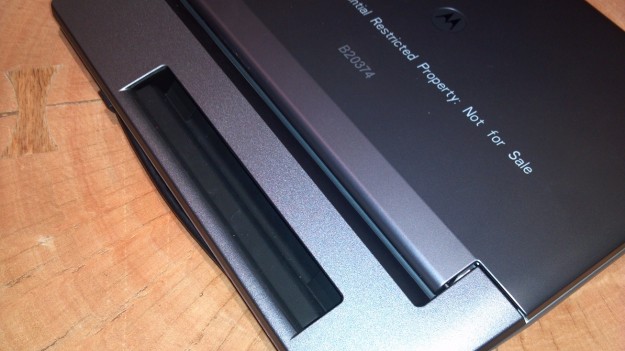 The phone is held snugly in place thanks to a rubberized material that lines the slot, and a cable comes out the back with jacks for the micro USB and HDMI ports that can be plugged into the phone. 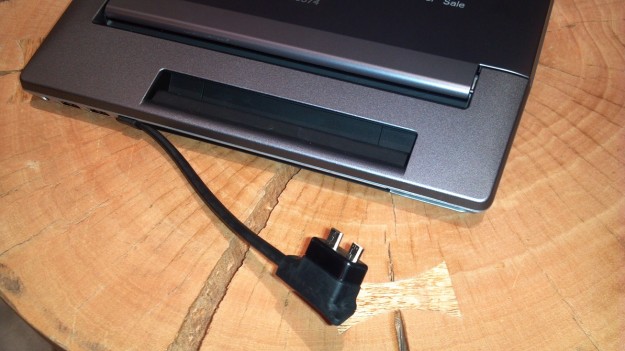 Additionally, speakers and two USB ports as well as a charging port adorn the laptop-like accessory.

The biggest improvement, in my opnion, is the greater screen tilting angle of the new Lapdock 100 compared to older Lapdocks. That means that the screen can tilt back further, allowing for more comfort when placing the device on one’s lap and using it as a ‘lap-top.’ On the older model, the screen didn’t tilt back far enough, and you’re constantly straining to see the screen when the Lapdock is placed on your lap. 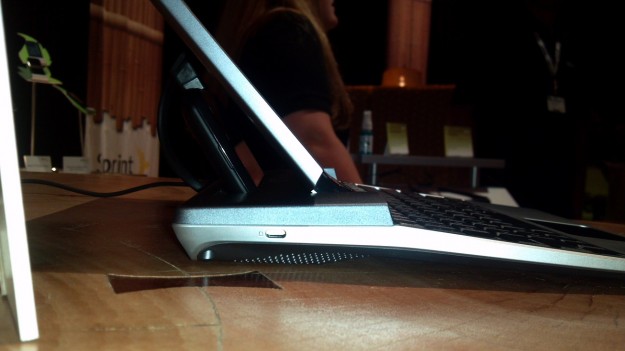 Another welcomed improvement that was missing from the original Lapdock is that two-finger scrolling is now supported! You can see that in action in our hands-on video below.

Another change from the original Lapdock to the Lapdock 100 is that the new Lapdock 100 makes use of older style keyboard keys rather than the newer, consumer-friendly, and modern looking chicklet keys for the keyboard. It’s not really a big deal, but with the curved bump, the device looks more like an old IBM typewriter than a modern complement to your smartphone. Usability isn’t really impacted, and the keys feel solid. Additionally, certain symbol and punctation keys are smaller than the regular keys, so you’ll have to adjust your typing a little. 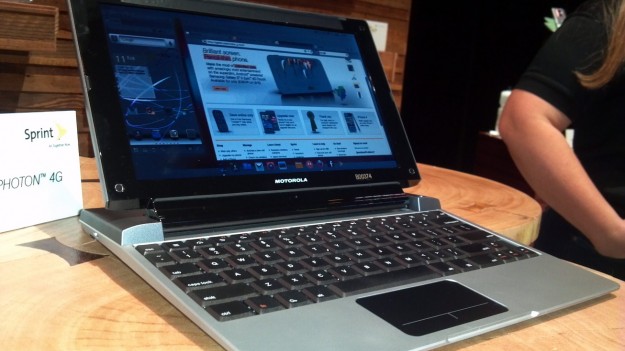 Engadget is now reporting that the device is expected to hit Sprint on October 21st–a date that we didn’t hear originally during the week at CTIA. Though pricing is not announced yet, Sprint told me that they are expecting the accessory to hit around $250 or less. Coupled with a $200 smartphone, you’ll have a lightweight, lite-powerted netbook for around $450-$500 with the Photon 4G and the Lapdock 100. Of course, performance will be more limited than a traditional Windows netbook, but you do have the more mobile aspect of just carrying your smartphone piece when you’re about. All of the Lapdock’s power–processor, modem for Internet connectivity, storage, memory, and RAM–comes from your Webtop-capable smartphone so the Lapdock itself is a ‘dumb’ accessory that requires a compatible phone to come alive.

When I had spoken to Motorola at the show, reps for the manufacturer said that the Lapdock 100 should be compatible with the Droid Bionic and Atrix 2 along with Sprint’s own Photon 4G. However, newer devices, like the Atrix 2, won’t be backward-compatible with older Lapdock accessories like those made for the Atrix 1 (Atrix 4G for AT&T).

*Note: All images in this post was captured on the Motorola Photon 4G’s 8-megapixel camera. The Motorola Photon 4G is currently available through Sprint and is WiMax phone for the carrier’s Now Network with a high resolution 4.3-inch qHD display, world phone capabilities, and 720p HD video capture.