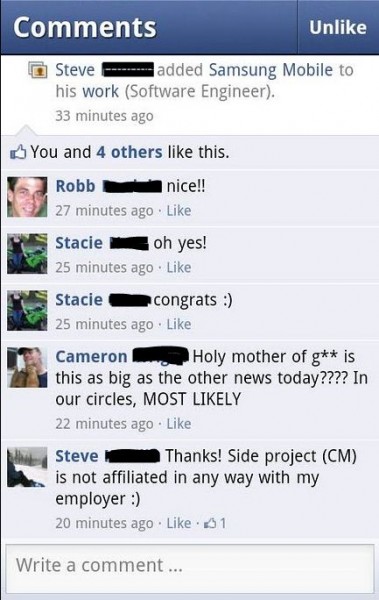 It looks like Samsung has nabbed the founding developer behind the CyanogenMod custom ROM series for various Android devices, Steve Kondik. Kondik has indicated his official corporate involvement with Samsung by updating his Facebook status to say that he is now a Software Engineer with Samsung Mobile, but maintains that his custom CyanogenMod ROM efforts are “affiliated in any way with his employer.”

While on the surface, nabbing Kondik would definitely help Samsung improve and differentiate its products on the software side against other Android rivals. As Android is readily used in various phones, tablets, and products by many different manufacturers of products, Samsung’s efforts on the software side by providing an attractive UI, enhanced apps and widgets, and better out of the box software experience may appeal to users.

However, beneath the surface, we’re wondering if Kondik’s hiring may have more to do with the impending legal situations behind Android. Given Motorola’s recent acquisition by Google, perhaps enhancing the custom and proprietary TouchWiz UI on Samsung products will be a good way to steer the average consumers to Samsung smartphones, like the flagship Glaaxy S II devices. Additionally, with Samsung’s ongoing legal battles with Apple over its phones and tablet products violating designs and patents of the iOS-maker, perhaps taking Kondik on board may help Samsung steer TouchWiz in a visual design way that doesn’t resemble iOS so much.

Whatever the reason is, CyanogenMod is among the best custom ROMs on the market, and we’re excited for Kondik on his new endeavors with Samsung. We’re also excited to learn, hopefully soon, how he’ll help to shape Samsung products.

Via: GadgetU and Droid Matters