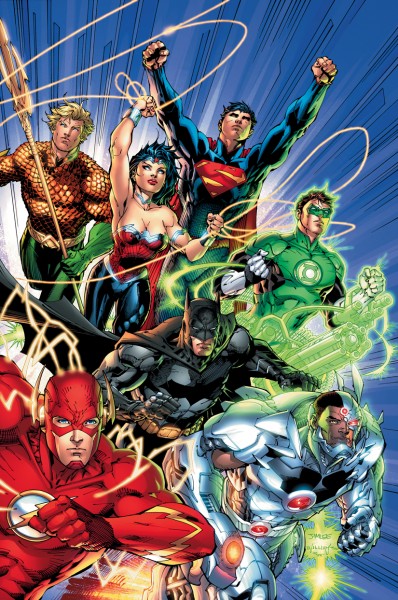 Superhero movies got you thinking about jumping back into comic books, but you aren’t sure how? Well, DC Comics has a big opening for you: a full relaunch of all titles at issue #1! Better yet, they’ll all be released in digital and print versions on the same day! And yes, the digital versions are available on iOS, Android, and PC/Mac. Let me show you how.

In a story on USA Today, DC Comics announced a total relaunch of their superhero line. All titles are starting or restarting at issue #1 with 52 titles total. Seen here is the preview image of the new Justice League of America, which looks a lot like the old Justice League of America with jazzed up costumes, plus Cyborg. The big number flip starts with this title on August 31st.

So how can you get in on the new digital comics action? Fortunately, DC Comics distributes digitally through the cross-platform Comixology system.* They have apps for both iOS and Android. For everyone else, there’s a Flash-based online reading system. And lookee here: there’s a GBM Shortcut showing all three. Tablets used are my Fujitsu T900, my wife’s iPad 2, and the HTC Flyer I just received for evaluation (more on that soon).

As a lifelong superhero fan and someone who’s been inside the comic book industry (as a copywriter for AnotherUniverse.com back when that name meant something), I admit to a fondness to paper comic books that even years of tablet enthusiasm and digital advocacy cannot erase. But for new generations to enjoy the classic stories I grew up reading, digital is the only way to go. Reading (and destroying) an original copy of Flash #123 as I did just isn’t a feasible option nowadays.** Not sure I’ll be on board immediately for the new stuff, but a few of those classic storylines have started to reel me back in.

* Cross-platform for DC Comics at least. Marvel (owned by Disney, owned in part by Steve Jobs) is iOS-only.