Dell has announced that the keyboard-less edition of the Venue Pro, known as the Dell Venue, will be coming to Korea this month. Like the Venue Pro, the Dell Venue will feature a 4.1-inch AMOLED curved Gorilla Glass display. However, instead of the Windows Phone 7 mobile operating system found on the Venue Pro, with its portrait-oriented sliding keyboard, the Dell Venue will favor Google’s Android operating system, running Android 2.2 Froyo, which will have support for Adobe Flash 10.1 Mobile. The device’s home screen seems to display Dell’s customized and proprietary Dell Stage user interface, which adds useful widgets. If users prefer a more native Android feel, the Dell Stage widgets can be turned off. 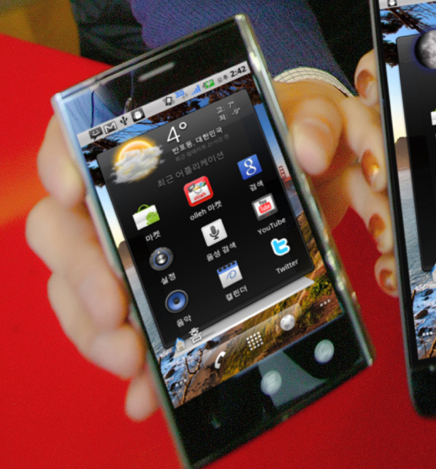 At a time when Google had just recently announced Android 2.3 Gingerbread, the Dell Venue’s launch with Android 2.2 Froyo may seem a bit dated already at the time of the handset’s release. However, it will still feel more modern at the time of release compared to the Dell Streak. The Streak was released when Android 2.2 Froyo was still the most current Android release; however, instead of Android 2.2, the Streak was released with a very stale Android 1.6 mobile operating system, which means that it lacked many of the useful enhancements that were found on the 2.2 release of Google’s OS.

The Dell Venue had previously also been seen at the FCC with support for GSM and HSPA support.

Not a lot of other details are known about the device at this time. The Venue will join the Dell Streak at the top of Dell’s high-end Android line-up. Unlike most modern Android smartphones with four physical or capacitive navigation buttons, it looks like the Dell Venue utilizes only three capacitive touch buttons at the bottom of the screen. The three buttons here would make the device easy to swap OS for Dell, as Windows Phone 7 requires 3 navigation buttons. In the future, based on the same chassis, Dell could release a Windows Phone 7 edition of the Venue as well without having to retool the design or components.

In Korea, the Venue will be priced at the equivalent of 608 USD.

It’s unclear if the Dell Venue will be launched outside of Korea.