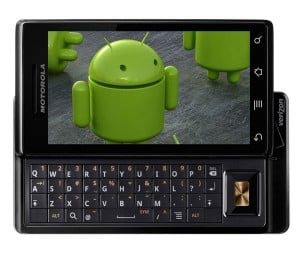 Various blogs have reacted to Google’s recently announced $12.5 billion acquisition of Motorola Mobility may saying that various rival Android smartphone-makers–HTC, Samsung, LG, and others–may not be completely happy with the deal as they’d be the odd third-wheel in a marriage of two–the union of Google’s Android operating system software with Motorola’s phone and tablet hardware. Publicly, these companies have affirmed their support for Google, and the Android OS-maker is spinning its acquisition in terms of acquiring Motorola’s patent portfolio to defend the entire ecosystem. Privately, though a number of blogs have written editorials that Motorola’s rivals may not be all too pleased given that Motorola will now become part of Google and may have certain advantages when it comes to Android and building handsets. However, even if this is true, Android still offers the most promise to these rivals when compared to other smartphone operating systems.

Those blogs that have written to conjecture that these rivals may now give Windows Phone 7, Microsoft’s platform, more weight now that Google and Motorola have announced their nuptials have forgotten one thing–Microsoft is already in a relationship with Nokia, and that relationship doesn’t look like it’s going downhill. Nokia is the first Windows Phone 7 partner that Microsoft is even allowing access to write and modify the code for the platform, and that’s a huge move given Microsoft’s often tight reign on the platform and barring any UI customization and unsightly modifications to the OS in the past from any other partner in an effort to create consistent, uniform user experiences. It’s doubtful that Microsoft would allow any partner now to have the same deal as it has inked with Nokia, and that means that like Motorola’s relationship with Google, all the HTCs, Samsungs, and LGs of the world will continue to play a third wheel in Microsoft’s new-found love in Nokia.

Furthermore, these smartphone-makers have more room to continue to differentiate with Android given Google’s more relaxed approach. Rather than a small hub on Windows Phone 7’s Metro user interface, HTC can potentially continue to skin the Android operating system as it sees fit with Google and create its own experience. On Windows Phone 7, that’s not really part of the equation aside from a small, meager hub where HTC can cram a few widgets in, but not the same kind of Sense UI that we’ve been used to on Windows Mobile of yore nor on Android of today.

And when it comes to other operating systems, well those aren’t quite up for license just yet. HP is still mulling whether it wants to license webOS and BlackBerry is keeping its OS in-house as far as we know.

However, all that said, it doesn’t mean that we’re discrediting the fact that it is hard to simultaneously  license an OS and create a branded hardware experience at the same time. Apple had tried that strategy before and failed miserably and Palm had to separate its hardware business and Palm OS into two separate entities to appease Palm OS licensees in the pre-webOS days. To this fact, Google is making every effort to downplay its new role as a hardware manufacturer and using Motorola’s patent as a big sell to its partner.

At least on the surface, companies like Sony Ericsson, HTC, LG, and Samsung are supportive of Google’s PR spin, stating that they ‘welcome the news of today’s acquisition, which demonstrates that Google is deeply committed to defending Android, its partners, and the entire ecosystem.’

And what about going solo or using Bada? Well, handset-makers right now are stuck between a rock and a hard place. Going with Samsung’s Bada OS or creating a solo operating system would be risky business, and chances of success are probably even worse than starting your own restaurant as these companies would need to woo and entice developers to gain traction in the market. Right now, for consumers, apps sell, and having an ecosystem of hardware accessories and apps seem to be the winning combo. Between Microsoft and Google, it seems that for companies that wish to have skinned user experiences, Android is still the lesser of evils.

For now, I don’t foresee any radical shifts towards Windows Phone 7, unless Google unilaterally favors Motorola excessively in the future.