The Motorola Droid 4 is poised to receive its first update since the device first launched on Verizon’s 4G LTE network back in February of this year.

The update, first discovered by Droid-Life, is set to bring a number of enhancements and fixes to Big Red’s iconic smartphone. Chief among them is improved battery life, something that seems to come with every single Android update.

It’s also going to bring fixes for the backlight on the keyboard and improvements to Wi-Fi connectivity.

There is also quite a bit more on board the 18MB update and you can see the full list of fixes and enhancements below. 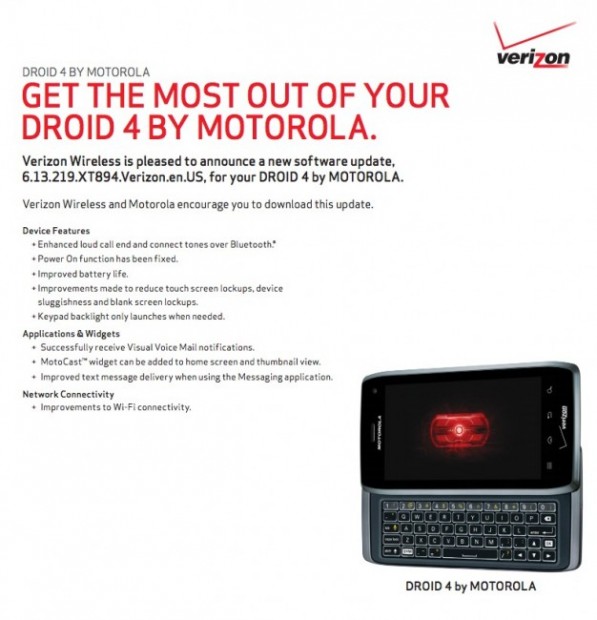 Now, Verizon has not rolled this out yet. It’s approved and waiting in the wings, but it hasn’t rolled out. But that doesn’t mean Droid 4 owners can’t get it right now.

It can be manually installed.

For Droid 4 owners that wish to manually install the update, here’s how to do it.

1) Download this file and place it in the root of your SD card on your phone.

2) Power the phone off and when it reboots, hold down the Power button and volume keys at the same time. This will take you to the bootloader menu.

3) Select Recovery with the volume up key and press down both volume buttons when the exclamation point appears.

4) Go down to “Apply update from sdcard.” You’ll want to select this with the device’s power button.

6) The update should install and you’ll have all of the fixes on board your Droid 4.

You do not need to be rooted to do this and this is the official version of the update. Let us know how the update works out in the comments.