Motorola’s fourth generation QWERTY slider Android smartphone for Verizon’s network was glimpsed on the carrier’s DroidDoes.com webpage, showing off a form factor similar to the recently released tablet Droid RAZR. The Droid 4will have a 5-row edge-lit keyboard and was rumored to be coming on December 8, though that speculated launch never materialized.

The device will come with Android 2.3 Gingerbread and will be powered by the same dual-core 1.2 GHz as the Droid RAZR. The Droid 4 will have a slightly smaller 4-inch display, as opposed to the RAZR’s 4.3-inch, but will maintain the qHD resolution. The phone will have an 8-megapixel camera with full 1080p HD video capture, 1 GB RAM, 16 GB storage, and 4G LTE connectivity. 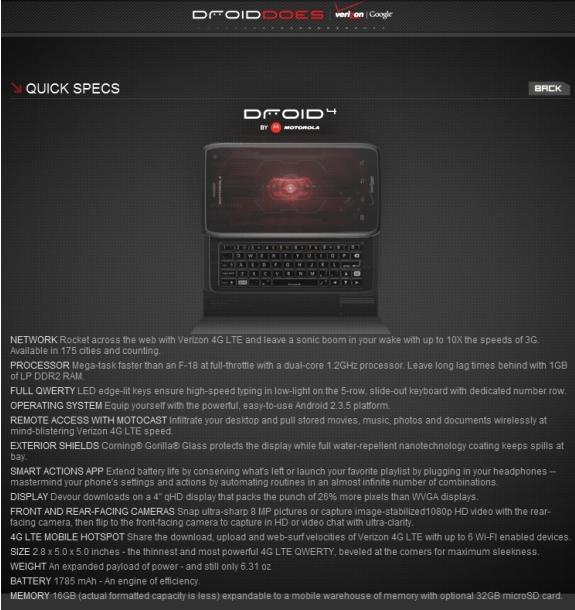 Users of the the Droid 3 will probably want to upgrade to the Droid 4 for the 4G LTE connectivity. The Droid 4 will be the carrier’s second QWERTY slider phone on its LTE network and will represent Verizon’s highest-end offering.

The DroidDoes website no longer shows information about the Droid 4. However, as one website was able to capture images and screenshots, it suggests that Verizon probably made the page live briefly.

Via: Unwired View via pocketnow