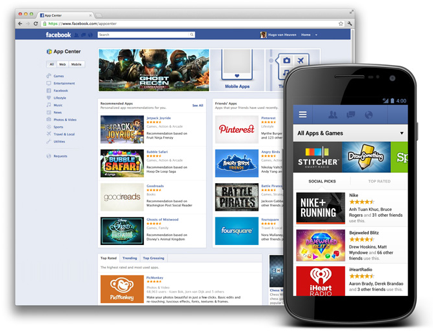 Downloading apps is still not handled through Facebook directly, and it appears that App Center for now is more of a social discovery tool for apps rather than a competing app store like Amazon’s Appstore for Android is to Google’s Play Store on Android. According to Facebook, you can use the “Send to Mobile” feature to send apps from the computer to your handset and if a download is required, you’ll be sent to Apple’s App Store or Google Play store on Android.

Today we’re launching the App Center to make it easier to find apps you can enjoy with friends.

The App Center features mobile and web apps, such as Draw Something, Pinterest, and Nike+ GPS, and new apps including Jetpack Joyride, Ghosts of Mistwood, and Ghost Recon Commander.

The App Center gives you personalized recommendations, and lets you browse the apps your friends use. It only lists high-quality apps, based on feedback from people who use the app.

Facebook will be slowly deploying App Center to a small number of users and a broad rollout will occur over the next few weeks.

It’s unclear if Facebook is trailing App Center in its limited social discovery capacity for discovering new apps right now in anticipation for launching its rumored and much speculated branded phone in the future in a similar way that Amazon’s Appstore for Android was a precursor to the Amazon Kindle Fire tablet’s launch.