Falcon Pro is the best Android Twitter app we’ve found, delivering a great looking user interface with support for lists and many other great features.

Falcon Pro looks great on the Nexus 4, the larger display of the Galaxy Note 2 and on the Nexus 7 Android tablet. In short, it’s the Android Twitter app we’ve been waiting for.

If you’re using Plume or Tweetcaster, Falcon Pro is worth checking out, and it’s a steal at 99 cents. It’s the closest thing to Tweetbot for Android we’ve found. 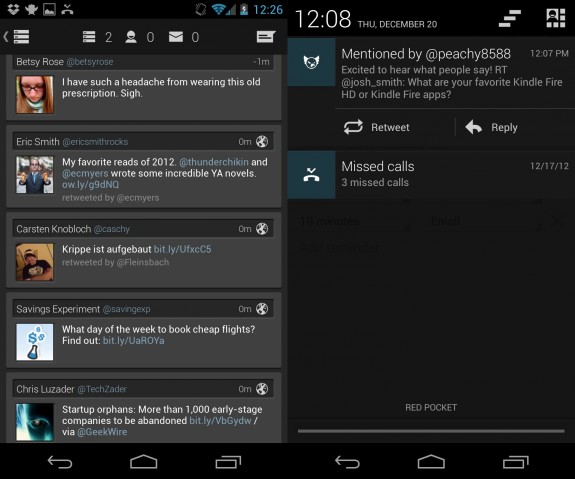 Falcon Pro is a great Twitter app for Android.

Falcon Pro offers a clean and simple Twitter timeline on the main screen with two menus to access more information. Swipe to the left and right to see settings, searches, lists and trends.

The main timeline contains shortcuts to mentions and direct messages. Tap on the top of the column to switch to that column and tap again to quickly jump to the top of the list of tweets without scrolling. Pull on the timeline to refresh any of the lists.

Twitter users that rely on lists will enjoy the fast access to their favorite groups of twitter users. Swipe from the right edge of the screen to the l;eft to see lists, searches and trends. Tap on a list to bring those tweets front and center. Swipe left to right to see the settings and shortcuts to profile information.

The app lets users tap on a tweet to see more of the details, like links and images without leaving Falcon Pro. Long press on any tweet to reply, retweet, favorite or share. This also pulls up options to Mute or block a user. Tap on a user’s profile pic to see their profile. 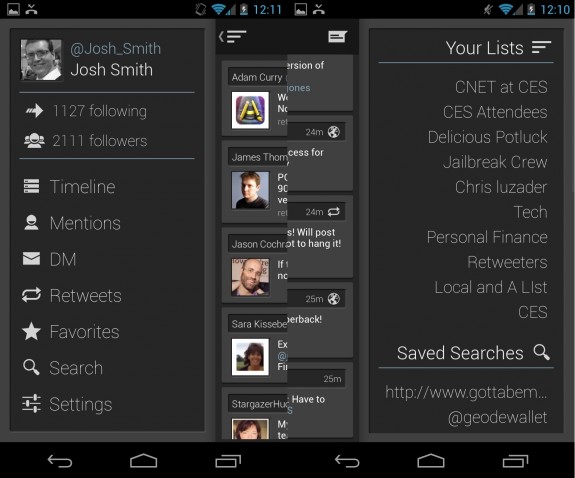 Users can control the text size of tweets and keep tweets in sync across devices with TweetMarker. Falcon Pro supports expanded notification on Android 4.1 and up so users can see a full tweet on the Notification screen.

There is no Falcon Pro widget, which is a disappointment, especially for users on the Nexus 4 who want to use the new Android 4.2 lock screen widget feature to check tweets without unlocking the phone.

Grab Falcon Pro on the Google Play Store for $0.99.