There are three FIFA 19 editions that you can buy this year, allowing you a lot of choice for the best selling soccer franchise. With a $20 or $40 price difference between the versions, you definitely need to explore what you get for your money.

The two more expensive FIFA 19 editions let you play early, and include a load of bonus items that will help you get ahead in FUT if you plan to play throughout the year. You can find FIFA 19 deals on all version of the game to help you save 10% to 20% on FIFA 19 no matter which version you buy.

On PC, you can also buy with Origin Access Premier if you want full access to all of the new EA games on your computer. On the Nintendo Switch there are only two editions.

Here’s how the three editions compare and what you need to know to decide which one you will buy. 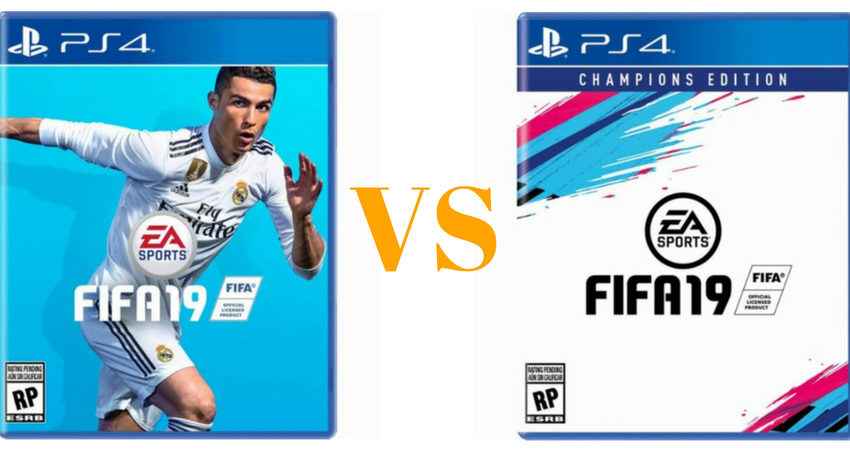 Which FIFA 19 edition should you buy?

The FIFA 19 release date is September 28th. If you buy the Champions or Ultimate Editions you get three days of early access to FIFA 19, so you can start playing on September 25th. On Xbox or PC, you can play early with EA Access or Origin Access, which allows you to play the full game early. Normally this is five days early.

FIFA 19 is available at Best Buy, GameStop and other retailers. You can also buy it digitally through Origin, Xbox and the PlayStation Store.

The FIFA 19 standard edition is available on PC, Xbox One, PS4 and the Nintendo Switch. This is the basic version of the game with a few pre-order bonuses. If you pre-order you get;

This is $59.99 and the cheapest version that will get you into the game. If you are a casual player who doesn’t play FIFA Ultimate Team, this is the edition you should buy.

The FIFA 19 Champions edition is available on PS4, Xbox One, PC and Nintendo Switch. This game includes bonus items and allows you to play early on September 25th. This version includes;

Keep in mind that you need to log in weekly for 20 weeks to get all of the bonus items. If you just want to play early, look into EA Access or Origin Access.

If you like FIFA Ultimate Team or you want to play early, this is the edition for you. Unless you want even more bonus items. 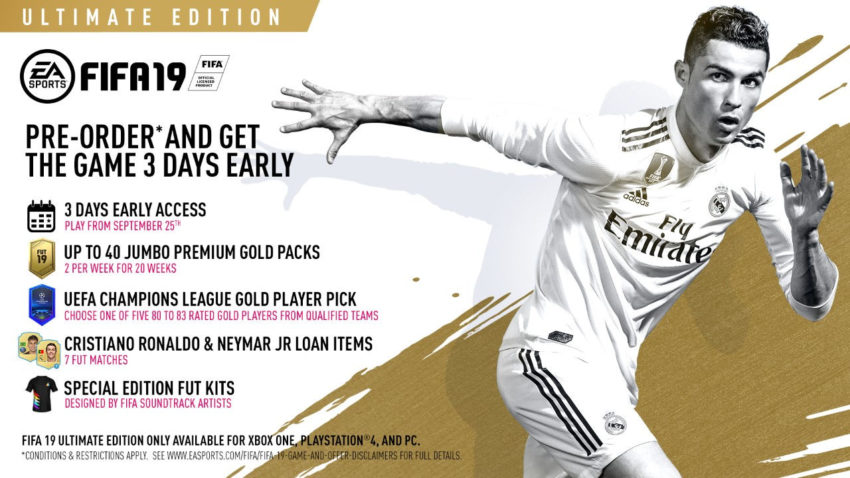 If you a diehard FUT fan, pick up the FIFA 19 Ultimate edition.

The FIFA 19 Ultimate Edition is a digital version of FIFA 19 aimed at hardcore players who want the most FUT bonus items. You can only get the FIFA 19 Ultimate edition on Xbox One, PS4 or PC. This is $99.99 and includes a load of extras for FUT. Here’s what you get in addition to playing three days early;

If you live inside the FIFA Ultimate Team mode, this is the version you need to buy. You’ll get a load of players throughout the first 20 weeks of the game and save money buying packs, if you are willing to wait. If you want packs up front, you may want to skip this version and buy packs all at once.

The two lower cost FIFA 19 editions are on both digital and disk, while the FIFA 19 Ultimate edition is only available digitally. If you buy through Origin Access, you will get a digital game.

Prices are the same for disk and digital versions, but typically you can find bigger deals on the physical versions at Best Buy or Amazon. If you think you may want to let someone borrow the game or if you want to sell it after a short period, you may want to buy on disk.

Gamers on the Switch should consider a digital version so they have one less cartridge to carry around.