Fortnite Season 9 is here and with it there are new locations and wind transports, as well as a ton of cosmetic options. This is what you need to know about the Fortnite Season 9 Battle Pass and the new update.

In season 9 there are loads of new locations and challenges and you can start playing today with the launch of the new Season Pass in game for 950 V Bucks, or about $15.

You can get up to 100 new rewards with tons of new skins and you can collect Fortbytes, a new secret item in the game that you need the Battle Pass to get. 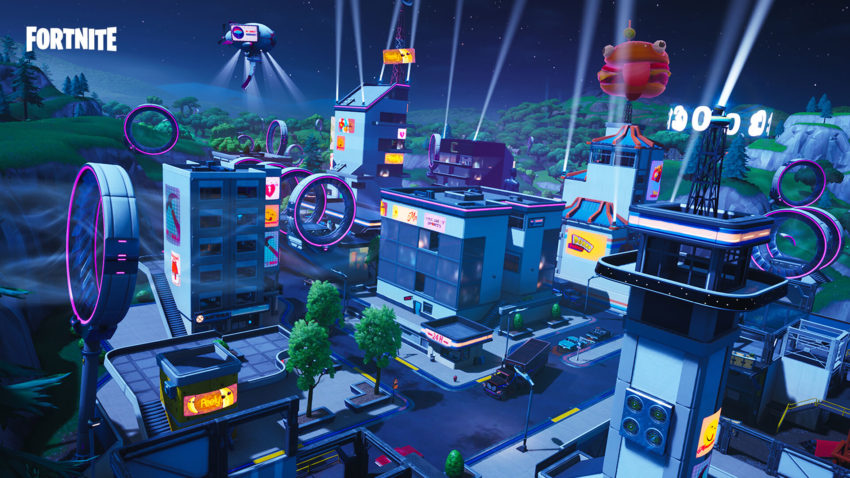 New locations in Season 9 and slipstreams offer new ways to get around.

The new Fortnite update and the start of season 9 brings a host of changes to the map, gameplay and even weapons.

New Fortnite locations include Neo Tilted, a Tilted Towers replacement. Mega Mall on Retail Row and a Pressure Plant where the volcano previously was.

Slipstreams now offer a way to move around the map faster and change direction.  You can exit these at different angles and with more or less momentum to get to other parts of the map. Watch out, because vehicles and grenades can also enter.

Air Vents are another new option that allows you to get a short burst to another area without taking any fall damage.

Fortbytes are a new in game collectible with 100 hidden throughout the season. So far 18 Fortbytes are available and at least one more will arrive each day. You must collect these during Season 9, and you need the Battle Pass to do this. Once you collect them all you can decrypt an image and you’ll unlock rewards and secrets.

Grenades are back in the game, and there is a new combat shotgun, but many weapons are removed to the vault. You can check out the full patch notes for more on bug fixes.

The Fortnite Season 9 battle pass is 950 V Bucks and you can unlock over 100 new rewards that are mainly cosmetics. When you buy the Season 9 Battle Pass you immediately get the Sentinel Outfit and Rox. As you level up, you can unlock dual pickaxes, a robo kitty, flying frisbees and more. If you hit level 100, you unlock the Vendetta outfit.

You can buy the Battle Bundle for 2,800 V Bucks which includes Bunker Jonesy and several other upgrades.

Watch out for offers for free V Bucks that can end up costing you more than you’d think.

The Fortbytes are scattered through the map, and you may need the right skin or you may need to complete a challenge to be able to pick some of these up. For example, you need to go to a frozen island with the Sentinel skin to pick up one of them, but others are unlocked by completing challenges. Here’s the list so far;

Expect to see more appear in the coming days with at least one new Fortbyte each day.