At Mobile World Congress, Fujitsu showed off two dual-screen phone concepts, that can be used as a ‘tablet’ with both screens. Interest in dual-screen devices have grown since Sprint had introduced the Kyocera Echo as that class of device not only provides more screen area in a compact form factor when folded into a single screen, but also adds the power of true multi-tasking by running two apps side by side or displaying different panes of information simultaneously when opened in a tablet mode. 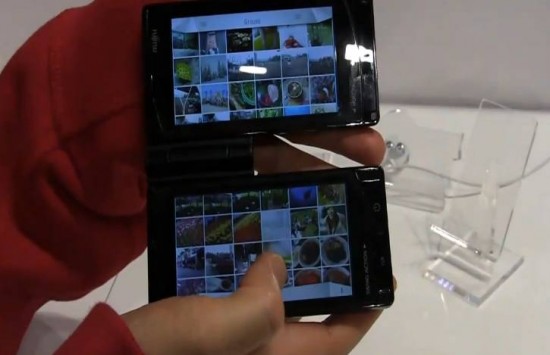 The first device is a smartphone which can be opened in long portrait mode, with the two screens aligned vertically like a clamshell flip phone, or in stacked landscape mode, like the Kyocera Echo. In either orientation, users can view the same app to span both screens, have dual-panes to display different content of the same app on the screens, or have different functions on different screens. Unlike the Kyocera Echo, this one runs on the Symbian platform.

The second device seen in the video is an Android 2.2 tablet concept with dual stacked horizontal screens. That device doesn’t fold and is basically just two screens stacked together, which would provide more versatility than a normal tablet as you can emulate viewing two different ‘windows’ at the same time, something that you can’t do on today’s tablets like the Galaxy Tab. This way, if you’re browsing and emailing, you can have one screen display the browser and the second screen displaying your emails so you don’t have to constant exit out of one app to switch to the other.