Fujitsu has demonstrated a prototype of a Gesture Keyboard experience for touchscreen tablets that does not require physical or hardware keys. In a similar usage scenario to Microsoft’s Touch Keyboard cover for that company’s Surface RT and Surface Pro tablets, Fujitsu’s keyboard concept is a separate, external keyboard so users would not need to directly interact with the touchscreen to type, like on Apple’s iPad.

By using the front-facing camera, Fujitsu demonstrates that the company’s algorithms can track your finger movements when you type on a flat surface. 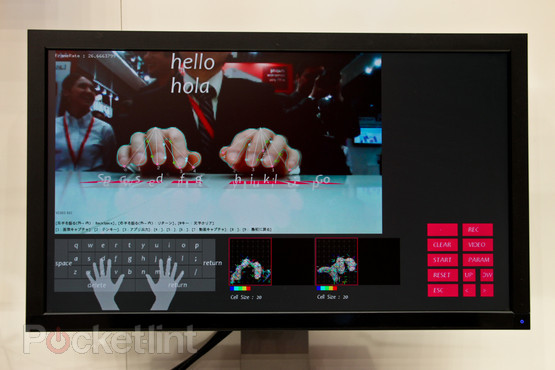 The camera captures your finger placement and software algorithm is used to try to guess what letters you’re trying to type as you move your fingers about on top of a table.

The concept is similar to ones developed in the past where a laser would project virtual keys onto a tabletop and a camera would capture and track your finger movements as you type. Unlike that concept, Fujitsu’s idea doesn’t require any projections and you can use this on any surface discretely. No letters are shown. You’ll just have to use your head to envision where the QWERTY letters are and type as you would. You do get a visual representation of what you’re typing and where your fingers are on the tablet’s screen according to Pocket-lint.

The other thing that’s required from the Fujitsu concept is a good light source. Good lighting is needed for the camera to track your finger movements.