Galaxy Note 5 vs Nexus 6: What You Need to Know

The Samsung Galaxy Note 5 is finally official and will be available around the globe starting August 21st. This new phone improves on almost every aspect over the original, delivers a beautiful 5.7-inch screen and premium design similar to the Galaxy S6, and just looks good. With so many options available, buyers have a tough choice as 2015 continues. Here’s how the new Note 5 compares to the bigger Nexus 6 by Google.

On August 13th at the annual Samsung Unpacked event in New York City, Samsung actually announced the new Note 5 and a big curved Galaxy S6 Edge Plus. For those who’d just like to have a big phone, one worth considering over the Note 5 is the Nexus 6, and they both have a few pros and cons we’ll be explaining below.

The new Samsung Galaxy Note 5 is a fantastic smartphone built out of all glass and aluminum. It no longer feels like a cheap plastic Samsung phone, which is one of a few things that separates it from the Nexus 6. Prospective buyers will want to read on for all the details about both smartphones, then choose what’s right for them. 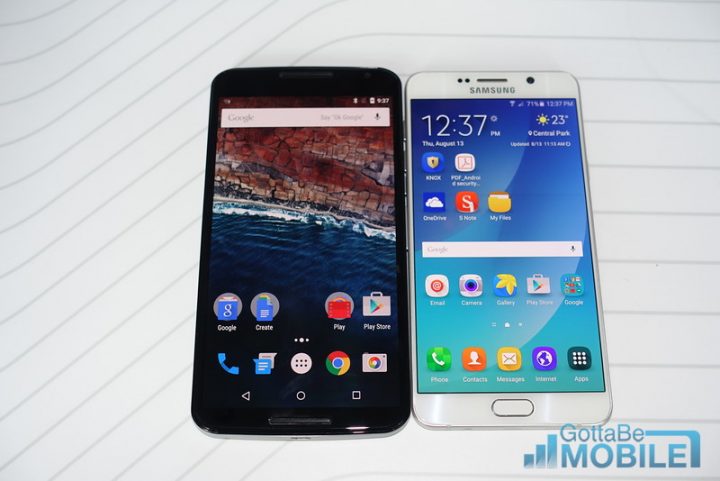 The Nexus 6 was actually announced and released around the same time as the Galaxy Note 4, so it is actually somewhat old but still has pretty good specs, the latest version of Android, and will get quick updates to Android 6.0 Marshmallow. It may not be as powerful as the new Note, but buyers who don’t need a stylus may want to consider the bigger 5.96-inch Nexus 6 as an alternative.

Samsung’s Note 5 has a lot more to offer, but costs quite a bit more, not to mention doesn’t run stock Android. There are a lot of things a buyer must consider before signing a 2-year contract or setting up monthly payments on a $700-$800 smartphone.

Before heading into a T-Mobile or Verizon store, buyers will want to look through all the details below and figure out if the Note 5 is right for them, they just want a big 6-inch screen like the Nexus 6, or if a cheaper option like the Moto X Pure Edition with the same size 5.7-inch screen is a better choice. Read on for everything you need to know, and a few things that separates Samsung’s Note 5 from Google’s Nexus 6.