Galaxy Note 7 vs Galaxy S7 Edge: What You Need to Know

The new Galaxy Note 7 was released on August 19th and is one of the best smartphones released in 2016. However, a global recall over the battery exploding has all owners returning their device and potential buyers looking elsewhere. If you’re one of the many wondering what to buy instead, read on for our Galaxy Note 7 vs Galaxy S7 Edge comparison.

Back in February Samsung announced the Galaxy S7 and a bigger Galaxy S7 Edge offering a 5.5-inch screen. It has plenty to offer, nearly the same specs as the Note 7, and it too is water-resistant. The screen is just a hair smaller than the Note, making it a great alternative.

Comparing the two current Note 7 owners or potential buyers will notice they are very similar. Both phones have a curved display, a similar design, the same specs under the hood and much more. There are a few key differences like the S-Pen stylus, Iris scanner or more storage on the Note 7, but those aren’t deal-breakers for most. Read on for a full breakdown. 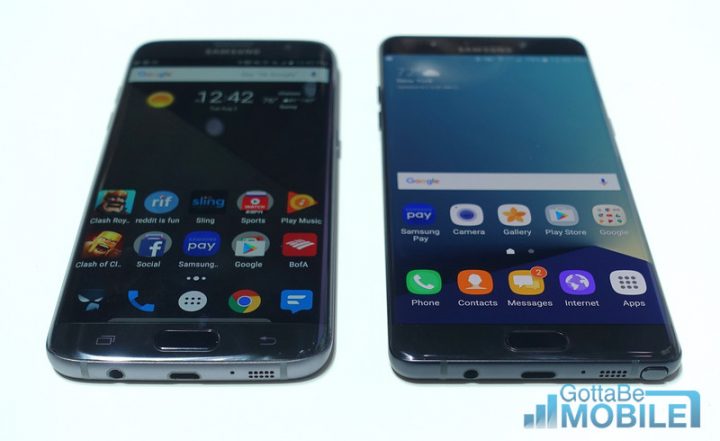 When the Galaxy S7 Edge was announced with a big 5.5-inch screen many figured Samsung would increase the size of the Note, to separate the two. However, that didn’t end up happening and the end result is two phones that are extremely similar in what they have to offer, but one has a little more, for a higher price tag. It all comes down to how much users want to spend, and if that extra is worth a bigger screen and a few features you may or may not use. The Note 7 has a 5.7-inch display, which is only .2 bigger than the 5.5-inch Galaxy S7 Edge. You’ll barely notice the difference.

If you’ve been debating whether or not to get the excellent and highly praised Galaxy S7 Edge, this should be helpful. It’s one of our favorite phones of the year, won an Editors’ Choice Award, and we expected the Note 7 to be even better. It is, too, but sadly a recall is causing problems for buyers which are now looking to the S7 Edge instead.

Below is a slideshow with everything potential buyers need to know about the new Galaxy Note 7, how it compares to the S7 Edge and what makes them different. Spoiler, there isn’t much, and the S7 Edge is a great alternative worth picking up today.