After it was leaked and confirmed by a Samsung executive that the 8-inch Galaxy Note tablet would debut at Mobile World Congress, a newly leaked slide suggests that the iPad mini competitor will be available for consumers to purchase as early as March. Exact pricing is still unknown at this time, but the tablet will likely cost less than the 10.1-inch Galaxy Note tablet that currently starts at $500 for the 16 GB WiFi-only model. The price is the same as the full-sized 9.7-inch iPad tablet, though the 10.1-inch Note has the additional feature of an active digitizer. 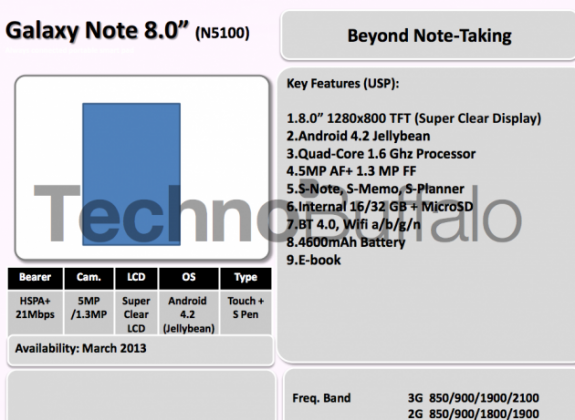 The March availability is also curiously timed as well. In the past, Apple had historically announced its full-sized tablet in the March period and availability was typically about a month later. However, this fall with the launch of the iPad mini, Apple decided to also offer a slight refresh of the full size slate and called it the iPad with Retina Display, equipping the tablet with slightly upgraded processing power and the Lightning port. It’s unclear if Apple intends for another iPad refresh this spring to bring the tablet’s refresh cycle back to its historical patterns.

The March availability of the Note 8.0 would mean Samsung is really battling Apple in the tablet space if Apple decides to do another iPad refresh at March. The Galaxy Note 8 would launch with a quad-core 1.6 GHz processor, presumably the same Exynos CPU on the Galaxy Note 2 phablet, an 8-inch 1280 X 800 Super Clear LCD panel, and 5-megapixel rear camera.

The March availability date would probably be for Europe and Asia as the product listed on the roadmap shows HSPA+ connectivity. A WiFi-only Galaxy Note 8.0 would launch soon, but likely any tablet released in U.S. on AT&T, T-Mobile, Sprint, or Verizon this year would have to have LTE support as well. If the Note 8.0 came to the U.S. with mobile broadband, it would probably be at a delayed date as the the Galaxy Note 10.1 with LTE is just now landing on Verizon‘s network months after the WiFi-only version was available.

The Samsung roadmap obtained by TechnoBuffalo also mentions other products that are likely not coming to the U.S. market including an entry level Samsung Galaxy Young, Galaxy X Cover 2, and Galaxy Pocket.