With a Galaxy Note Edge release confirmed for later this year, many consumers are looking at Samsung’s unique smartphone. Some of those prospective buyers are Samsung Galaxy S4 owners who are thinking about taking an upgrade. This Galaxy Note Edge vs Galaxy S4 comparison addresses the most important differences, and similarities, that buyers need to know.

On September 3rd, Samsung arrived in Berlin, Germany to announce several new products for the fall. First, we saw another intro for the Samsung Gear S, an Apple Watch competitor and a device that appears to be a solid alternative to current Android smartwatches. We also saw the Gear VR virtual reality headset make its first appearance.

Many of those consumers are Galaxy S4 users who are weighing their options after a year and a half with Samsung’s former flagship. With some carriers offering early upgrades, some Galaxy S4 users are thinking about making a switch. While the Galaxy Note 4, iPhone 6 and iPhone 6 Plus are both worth looking at, the Samsung Galaxy Note Edge is another flagship that Galaxy S4 users familiar with TouchWiz will want to consider.

Earlier this week, a Samsung official revealed plans to release the Galaxy Note Edge in Korea in late October. That date isn’t official and perhaps serves as a target date for Samsung’s Next Big Thing. Korea and the U.S. seem to the be the focus for Samsung with a U.S. release confirmed for several carriers sometime in the fall.

Other counties though are likely going to have to wait. The UK apparently won’t be getting it at launch and Canada won’t get the Galaxy Note Edge until sometime in 2015.

What this means is that you probably won’t be able to physically compare the two for at least a month, maybe longer. As we’ve pointed out many times, we highly recommend absorbing this advice and then checking the phones out for yourself. Picking a smartphone is an extremely personal decision and it requires some hands on time. 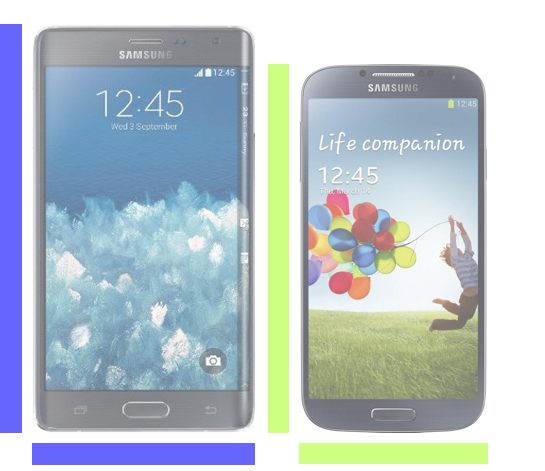 Here’s how that breaks down:

The Galaxy Note Edge comes with a bent, curved display that comes with some distinct advantages. The bent part of the Galaxy Note Edge’s display not only offers better viewing angles for content, it also provides users with an extremely quick way to access their most used applications, settings and more. All it takes is the swipe of a thumb. 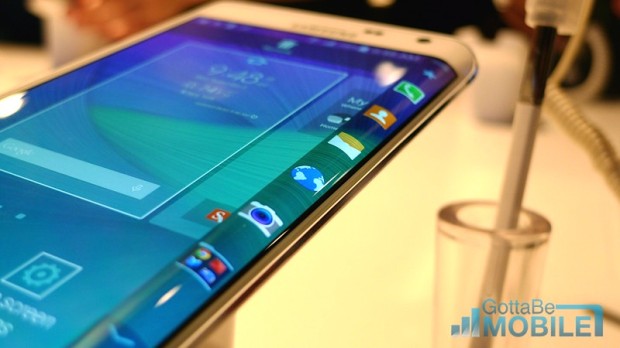 There are some other key differences as well. The Galaxy Note Edge will feature Optical Image Stabilization with its camera, technology that minimizes shakiness to deliver better looking photos and video. The Galaxy S4’s 13MP rear camera does not come with Optical Image Stabilization. It also doesn’t come with the same camera app that Samsung’s upgraded inside the Galaxy Note Edge’s software.

Samsung’s Galaxy S4 comes in two sizes (16GB and 32GB for AT&T and Verizon), the Galaxy Note Edge comes in two as well though we expect only one model to arrive in the United States. Both come with expandable storage and both come with removable back plates.

Samsung’s Galaxy S4 currently runs Android 4.4 KitKat as its base operating system. And while these two devices both run Samsung’s TouchWiz UI, they aren’t anything alike.

The Galaxy Note Edge runs Google’s Android 4.4.4 KitKat operating system as a base though the software has been modified with a new version of TouchWiz that’s designed for the S Pen and mulitasking in mind.

Multi-Window View allows users to run multiple applications on screen at the same time. With the Galaxy Note Edge, Samsung has made some admirable changes including the ability to access applications in full, split or pop-up screens. Galaxy Note Edge users will now also be able to reposition apps on the screen with just one swipe.

We could see some of the new features, Multi-Window View for instance, arrive for the Galaxy S4 down the road though that’s far from guaranteed. Samsung likes to outfit its old devices with new software features but it never releases the whole feature set.

One last thing we should point out. Samsung devices typically get two years of software support. The Galaxy S4 is approaching its second year of life which means that its window is closing pretty quickly. The Galaxy Note Edge on the other hand should get updated for the foreseeable future. Keep that in mind before buying the cheap Galaxy S4.

For more information about the Galaxy S4, have a look at our most recent review.