Galaxy S III to Launch in Blue and White?

According to the latest phone inventory leak, it appears that Samsung’s Galaxy S III Android flagship will be available in bright and bold colors. The leaked screenshot from Carphone Warehouse suggests that the flagship smartphone will be available in two colors at launch–blue and white, according to GSM Arena. This would match closely with the recently launched Samsung Galaxy Note, which was available in carbon blue and ceramic white, though it’s unclear if the blue hue on the Galaxy S III will be a brighter and vibrant blue than that on the business-centric Galaxy Note. 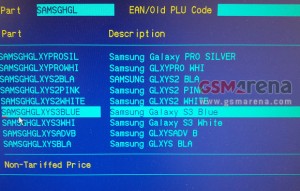 Blue and white both appear to be popular colors. Nokia, which had recently launched the Nokia Lumia 900 Windows Phone smartphone for AT&T’s 4G LTE network, had debuted its flagship smartphone in black, cyan, and white color. Nokia used a matte finish on the darker black and brighter cyan color, but opted to use a glossy finish for the white, presumably to keep the case clean and not attract dust, oils, and other materials that may show up more easily on a matte white surface.

More recently, a leaked screen protector suggest that the phone will have a 4.8-inch display, quad-core processor except in the U.S. where it will utilize Qualcomm’s dual-core Snapdragon S4 CPU.

It’s unclear if the Galaxy S III will be available in the standard black color.

We’ll hopefully find out soon enough with the launch of the device today in London.