Companies continue to tease the Samsung Galaxy S6 release ahead of Samsung’s Galaxy S6 launch, a launch that is expected to take place in just a few short weeks.

Earlier this month, Vodafone Netherlands revealed a Galaxy S6 splash page that teases the unannounced device ahead of its rumored launch date. The splash page is nothing more than a way for the carrier to get a head start on its rivals and to perhaps help the Dutch carrier gauge interest in the rumored Galaxy S5 successor.

A short time later, a lone Samsung Galaxy S6 case was discovered sitting on Amazon’s website. The case, from Cush Cases, is evidently a heavy duty rugged case for the unannounced Samsung Galaxy S6. The page lists a release date of February 24th which, as we’ve pointed out, has no barring on the actual Galaxy S6 release date. 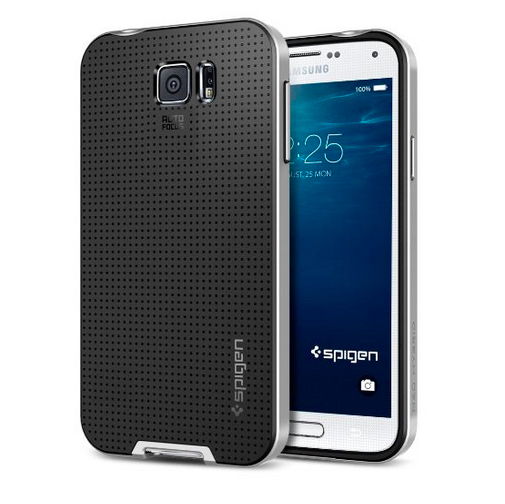 Today, well known accessory maker Spigen posted its own Galaxy S6 accessories on Amazon’s website, igniting a fresh round of hypotheses and questions from prospective Galaxy S6 buyers. Spigen’s listed a number of Galaxy S6 cases with release dates set for April. April is Samsung’s usual Galaxy S release window so the company is probably guessing at the Galaxy S6 release based on the company’s track record.

Speaking of history, this is not the first time that Spigen’s posted accessories well ahead of a major launch. As Droid-Life accurately points out, the company also posted cases for the Nexus 5, LG G3, HTC One M8, and Samsung Galaxy S5 well ahead of their respective launches. They also posted iPhone 6 cases on Amazon, months before Apple took the stage to announce its brand new flagship.

Manufacturers like Samsung often give accessory makers molds and dimensions ahead of launch, something that allows companies to do prep work for the release date. In the past, we’ve seen companies like Spigen provide accurate design details regarding unreleased flagship smartphones but there have also been times where they have been completely wrong.

So while there is a chance that Spigen’s images accurately depict at least some of the dimensions of the real Galaxy S6, there’s also a good chance that the real Galaxy S6 will look nothing like the phone depicted in the renders its used with these cases. Samsung’s also notorious for the tight security it keeps around its flagship smartphone which decreases the odds of this being the official Galaxy S6 even more.

The Samsung Galaxy S6 design is rumored to be a step up from the plastic designs Samsung’s become known for. The company continues to hint at the use of premium designs and new form factors and Galaxy S6 rumors insist that it will use metal, glass or a combination of both. Rumors also point to the arrival of a Galaxy S Edge with a bent display. The theory going around is that the company’s metal-based Galaxy Note 4 and Galaxy Alpha designs were a trial run for the Samsung Galaxy S6 design though that obviously hasn’t been confirmed.

We expect more carriers and accessory makers to take advantage of the Samsung Galaxy S6 hype before everything is said and done. Devices like the Galaxy S6 tend to bring eyes along with them and until they don’t, companies will continue to take advantage.

Samsung Galaxy S6 rumors point to a collection of high-powered specifications including a souped up Quad HD display, Exynos 64-bit processor, 20MP camera with OIS, a new design that employs premium materials perhaps aluminum or glass, wireless charging, and a release on all five major carriers in the United States which includes AT&T, Sprint, T-Mobile, U.S. Cellular, and Verizon.

The AT&T model recently showed up in a User Agent Profile string showcasing Quad HD resolution. While the UA Prof does not confirm the arrival of the Galaxy S6, the fact that the model number matches the Galaxy S6 model numbers that have leaked out numerous times in recent weeks makes it increasingly likely that AT&T will once again release a version of Samsung’s Galaxy S smartphone.