Yesterday was the big day for Apple device owners as the iOS 5 update hit. Though the upgrade didn’t go smoothly for everyone, many are enjoying their updated iPhones and iPads right this second. Android owners are looking at the lack of Ice Cream Sandwich in their lives and thinking: “Where’s Mine?”

Even if you don’t have the very latest and greatest Android that doesn’t mean you can’t have all the cool features those iOwners get to enjoy with iOS 5 and iCloud. After all, many of them are already available on Android (most for free).

If you want to iOSify your droid, here are the apps you need to replicate Siri, Find My Friends, Photo Stream, iMessage, iTunes Wi-Fi Sync, and everything else. 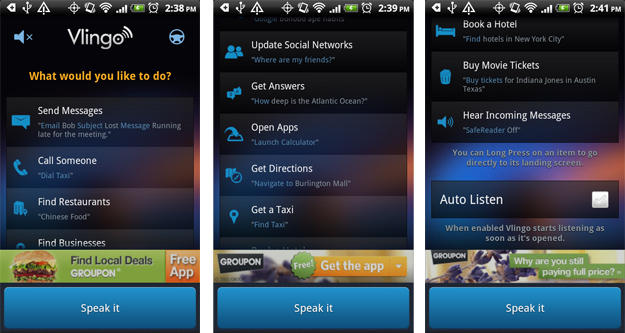 One of the most popular speech control apps for both iPhone and Android is Vlingo. It offers many of the same features as Siri, including the ability to bring up an app and perform a function, search the web, read your email, and answer questions. It works with Bluetooth headsets and will listen for commands even if you’re not directly in the app if you want it to. Vlingo obviously isn’t as deeply integrated into the OS as Siri is, but you might be surprised at all it can do. You can get it free in the Android Market as long as you don’t mind ads. It costs $1.99 to remove them. 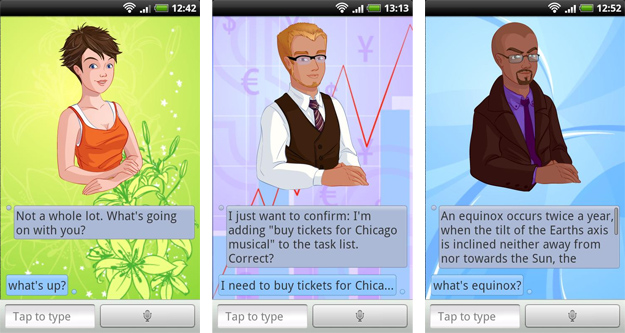 While Vlingo is very cool, it doesn’t offer all of the natural interaction you get with Siri. If you want to be able to talk to your phone like it’s a person, try Speaktoit Assistant. Not only does it have the same intuitive language and task interpretation skills as Sire, but users can create an avatar (male or female with variations on clothes, skin tone, etc.) to interact with, making the experience a bit more personal. With the addition of a couple of other apps you can even change the assistant’s voice.

Lookout Security & Antivirus offers many useful security features, including geolocation (even if the GPS is off) for free. However, if you want the remote wipe or remote lock features, you have to pay for the Premium service. You get many more bonuses, making the $2.99/month or $29.99/year price worth it. 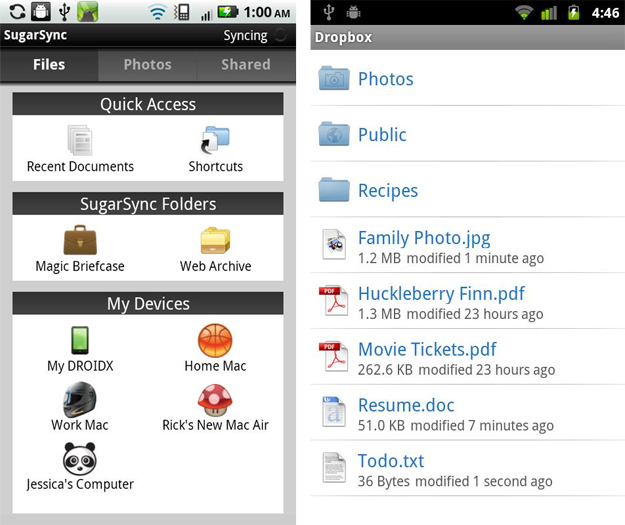 SugarSync and DropBox will sync your data across multiple devices and platforms, keeping documents, photos, and any other files you add up to date without any effort from you. Personally, I like SugarSync better than DropBox, but the latter is the current favorite amongst almost everyone else I know. 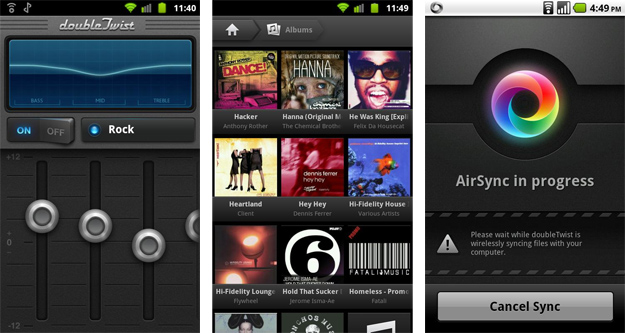 Media – The DoubleTwist player for Android is a sweet free media player. But add AirSync for $4.99 and you gain the ability to sync music, video and photos from your computer to your Android device. AirSync will pull in your existing player data (including iTunes) so playlists, ratings, and playcounts remain intact. Sync runs both ways, so you can send music, video and photos back to the computer as well. It works with PC and Mac, but does require you download the free desktop app as well.

Apps and Settings – the Android Market keeps track of every app you download and purchase. If you turn on Android’s Backup and Restore setting (under Privacy), app data and settings is stored on Google’s servers automatically. If you reinstall the app, Android will also reinstall your settings. 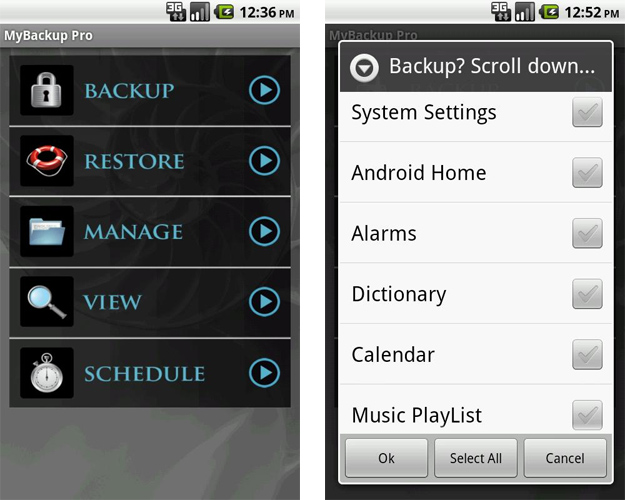 Sometimes this process can be finicky, but you can always choose a third-party app for backup purposes. I use MyBackup Pro because it will backup app APKs as well as SMS, MMS, Contacts, Call Logs, System Settings, your Home screens, Alarms, even your playlists. You can save the backup to your SD card and to the cloud (with password protection and encryption) either manually or on a regular schedule.

If this service looked familiar when Apple introduced it, that’s because it’s the same concept behind Google Latitude, which is probably already installed on your Android phone and tablet. Latitude works on both Android and iOS, but is only useful if your friends agree to share their location with you.

However, if you’re looking to keep track of family members, it can be useful. Especially the Ping function, which asks your contact to check in with you. 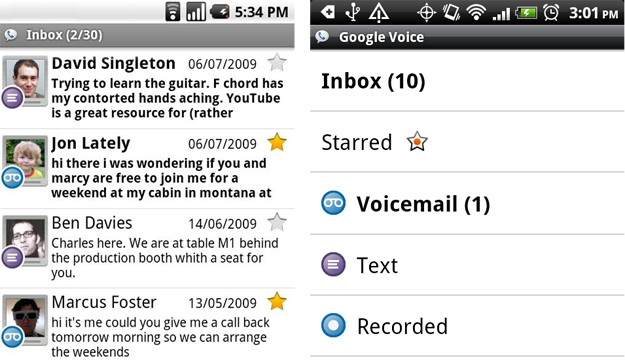 I’ve been using Google Voice since I had a Windows Mobile Phone (don’t laugh) so I didn’t have to go through Verizon’s awful voicemail system to get my messages. You can listen to them through the web interface as well as read and send text messages. This service is even better on Android because it integrates deeply with the OS. I only text via Google Voice, which uses data, not SMS, so it’s essentially free texting.

Of course, iMessage is more than just SMS, it’s a full-fledged messaging app. If you don’t have Google Talk (which requires Android 2.3.4) on your phone, then check out eBuddy XMS. This app has all the same features as iMessage but works across Android, BlackBerry, and iOS, so none of your friends feel left out. 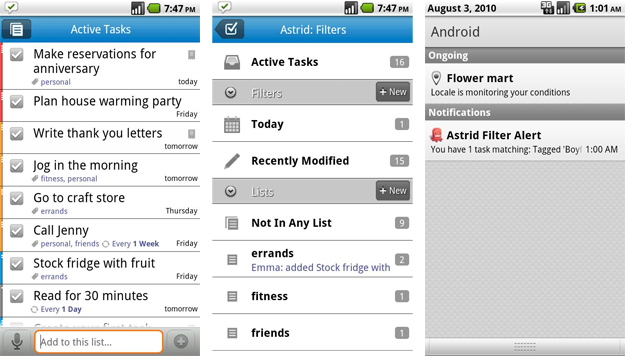 There are plenty of to-do lists available for Android (I like the ones integrated into SpringPad myself) but Astrid Tasks goes that extra step further by offering a Locale feature that ties reminders to a location. I’m a big fan of Astrid since it syncs with Google Tasks, which gives me access when I’m on my computer. It’ll also sync to Astrid’s own web interface where you can share lists and even assign tasks.

Aside from the Locale add-on ($1.49) there’s also a Power Pack that adds even more functionality: larger widgets, voice reminders, and add tasks via voice (just like Siri!).

iTunes in the Cloud Alternative

I’m a big fan of Google Music simply because of the sheer number of tracks you can store for free (up to 20,000). Plus, you don’t need to pay Apple to match the music you didn’t buy via iTunes ($24.99). Google Music will sync and store all of your music, no matter where you bought it. It works across multiple computers and Android devices. 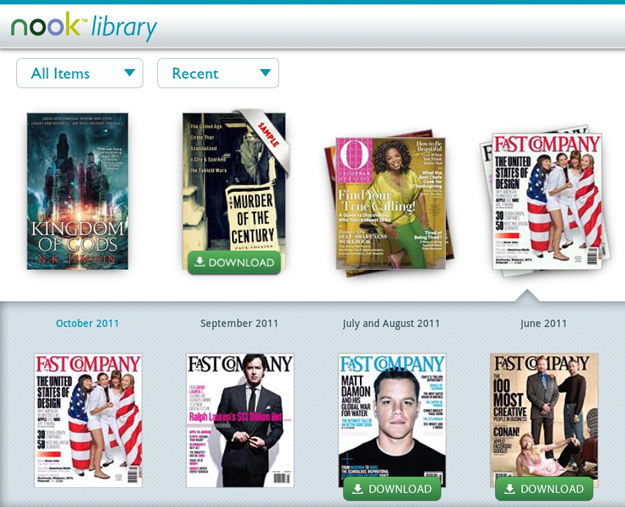 When Barnes & Noble introduced the Nook Color last year they also boasted about their vast full-color and layout magazine selection for the device. A few months ago they brought this same selection to all Android tablets (7-inches and larger) via the Nook app. I read magazines on my Samsung Galaxy Tab every month and love it. You’re likely to see the same selection as Nook offers over 180 magazines and 35 newspapers. 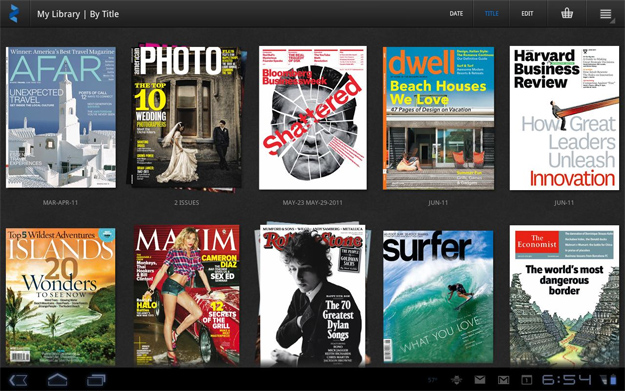 Zinio is another favorite among people who love their digital periodicals. With almost 5,000 titles in 33 languages you’ll probably be able to find any magazine or newspaper you want from across the globe. I also like that it works for Android phones (2.2 and above) as well as tablets.