According to The Official Google Blog, the big additional feature is the ability to start Hangouts from the app. Users previously needed to have a friend on a laptop or desktop start a Hangout, but now anybody with an Android smartphone can start a Hangout from anywhere they have Internet access. 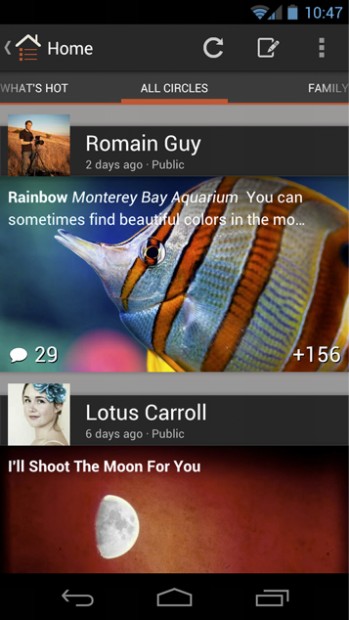 The Android app uses a ribbon at the top of the stream, a design that is familiar to anybody that’s used stock Ice Cream Sandwich. The ribbon is similar to the one in the old app, it just looks a bit different. Aside from the updated stream, the new Google+ for Android actually looks like the older version with some ICS design updates.

The new Google+ app update also brings a few other features to make the app more useful. Google made the app easier to use by making actions like +1 easier to perform in one touch.

Users can now use the Android app to edit posts inline, making it easier to correct mistakes, and users can also download photos from the Google+ app and set them as their wallpaper.

The new Google+ app is now available in the Google Play Store as version 2.6.