This past week at Mobile World Congress Google announced some exciting news as the company looks to take on Amazon Alexa. The popular Google Assistant is being released for all Android smartphones. Any phone running Android 6.0 Marshmallow or newer can expect it to arrive as of March 2nd.

As many Android users may know, the Google Assistant is a neat piece of software. It’s very similar to Siri from Apple or Amazon’s Alexa. Only much more capable. This artificial intelligence learns from us, and is one of the most advanced things our smartphones can do.

The Assistant first debuted on the new Google Pixel and Pixel XL. Then with Google Home, a smart connected speaker that can control your home. It has a lot to offer, like always-listening modes ready to take commands, built-in games, and can answer questions or turn on your lights. The options are almost endless, and more are being added every day. The video below confirms the Google Assistant release date.

After the initial announcement last week, Google is right on time with the release date. Stating it would be available “soon” and now confirming the broad rollout. Expect updates on the Google Play Store starting March 2nd for all Android devices running Android 6.0 Marshmallow and above.

The fact that it can understand context, and answer questions in a string of voice commands without forgetting the original question, sets it apart from the competition. This is one of many key features that users can be excited about starting March 2nd.

Ask Apple’s Siri about a movie, then ask another question and it forgets about the movie and starts over. With the Google Assistant, it stays in touch with the original topic. Not to mention a slew of other controls, features, jokes, and more. It’s like a virtual friend you can talk to, ask questions, get directions, or control your entire home and all smart connected accessories.

Amazon’s Alexa is starting to be released in a slew of different products. The company is pushing it extremely hard. So much in fact, that this is likely a reactionary move by Google, making Assistant available for all devices. Competition is a good thing, and consumers will soon benefit from it.

Google Assistant For All Androids

The search giant knows that everyone needs a little helping hand sometimes, and what better way to do this than on our smartphones. The Assistant is currently limited to the Google Pixel and Pixel XL, but almost every new or updated Android will have it within the next week.

Starting March 2nd, any smartphone running on Android 6.0 Marshmallow or Android 7.0 Nougat can use the Google Assistant. That means the Galaxy S7, HTC 10, Nexus 6P, or even older devices like the Galaxy Note 5 or LG G5. 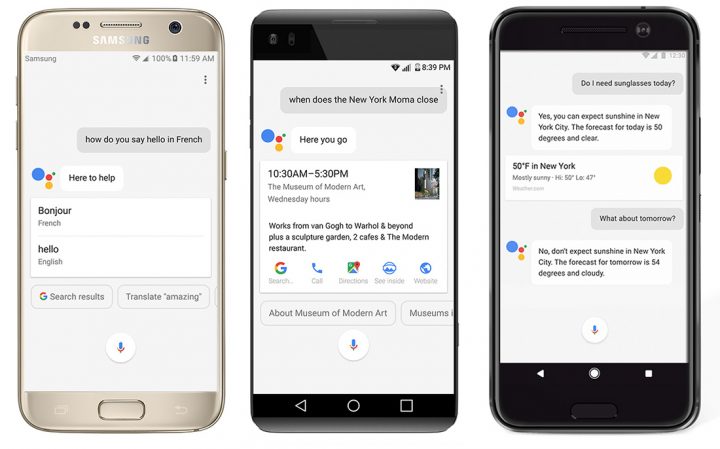 Specifically, Google stated the Assistant would arrive, “this week to English users in the U.S., followed by English in Australia, Canada and the United Kingdom, as well as German speakers in Germany.”

So while it won’t be available for literally every Android smartphone, not yet, it’s starting to rollout to millions of users. Above we see it on the Galaxy S7, LG V20 and an HTC phone, and more will get it soon enough. This first week of availability will be limited to the US, with other rollouts being announced in the near future.

According to Google users will receive an update to the Google Search application on the Play Store, not to mention behind the scenes with the Google Play Services application and framework. We’d recommend heading to the Google Play Store today, and checking for updates. Then simply press and hold the virtual or physical “home button” down, and the Assistant will spring to life. Agree to the terms, and enjoy all of its features.

Try asking the Assistant “I’m Feeling Lucky” and enjoy the game-show built in. It’s one of my household’s favorite features, and now everyone will be able to enjoy it. Again, we can expect more languages and regions to get this feature in the coming weeks or months. For now though, it’s only in the US for English users. Stay tuned for more details, and be on the lookout for the update on your phone.