It was a long day. My drug of choice to wind down and relax this evening was a nice glass of bourbon after dinner. After coming down a bit, for some strange reason I thought I’d check out my Twitter feeds to see what was up in the world. All of a sudden Twitter exploded with a vehemence and a vengeance that would send a politician running for cover after being caught with his pants down or skirt up, selfie or no. Twitter erupts every now and then over all sorts of events and this one was red, hot, and boiling. 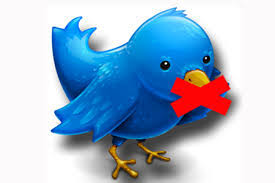 To its credit,  Twitter and its users can send a shock wave to the system of any company/politician/celebrity who might make a wrong move quicker than Miley Cyrus can gross out a TV audience. If somebody makes a wrong move it’s a shot heard round the world at the speed of the Internet. Twitter made what many perceive as an egregiously wrong move and found itself on the other side of one of its best features: being an outlet of those who feel wronged and aggrieved. The outrage lasted all of an afternoon and early evening. Twitter melted under the heat and reverted back to its old policy.

Previously, prior to the the policy being changed then reversed, if a Twitter user felt harassed, threatened, or just angry at another user, he or she could block that user. By blocking a user under that old policy, the offending user could no longer follow you or add you to a list, and you wouldn’t see any further tweets from that user. The offending user could no longer see tweets from the user who blocked him/her. Well, that’s how the policy worked on the surface. More on that in a moment.

The new policy would have effectively removed the blocking function and changed it into a muting function. Think of it as that age old toddler game of hide and seek. You know, Twitter wanted you to think like the toddler does when he/she covers his/her eyes and thinks because he/she can’t see you, you can’t see him/her. That’s cute when its a toddler playing that game. But it’s not so cute when individuals who feel harassed, abused, or otherwise marginalized perceive that a safeguard against abusive behavior is being removed.

A point needs to be made here. Twitter’s discarded, now reinstated blocking policy was somewhat of a panacea. It threw up a roadblock, but detours were available. If someone was intent on stalking someone else they could view a user’s profile without logging in. If they wanted to continue abusing someone on Twitter they could just create another account. The only way to truly keep from being harassed, abused, stalked, bullied, etc… on Twitter was for the user to stay off of Twitter. While I agree with those who think Twitter’s attempted policy change was misguided, Twitter is on the Internet. And if it’s on the Internet it’s public and so are you and your tweets. A tree may fall in the forest and no one may hear it, but if you tweet anyone can read it or find you.

In response to the outrage Twitter issued comments that, if nothing else, sounded like its newly enriched honchos didn’t begin to think this through. Twitter spokesman Jim Prosser was quoted as saying, “We saw antagonistic behavior where people would see they were blocked and be mad,” and “what you don’t know won’t hurt you.” The company line seemed to be that users who were being blocked were complaining so they made changes to quell some of that anger. In short, Twitter goofed and was on the wrong side of the equation.

And that brings up a larger point. We’ve seen social networks and other Internet companies make policy or user agreement changes before. Sometimes those changes step on what users perceive as their rights as users, often forgetting that the only real control they have is to stop using the service. Twitter certainly doesn’t want that, nor does any other company. And companies sure don’t want users revolting and protesting faster than they can contain the damage.

Like the pusher trying to maximize profits by cutting the dope, Twitter, Google, Facebook, and other Internet companies keep mixing and cutting their dope to maximize value too. But at the expense of users, they are maximizing value for their stockholders and advertisers. Wall Street is watching. But now, so are the users.

There’s a real push-me pull-you going on here as Internet users are taking the tools that companies own and users love to fight back when those companies make changes to the rules of the game. The tension is palpable and real. And each round of the game gets more and more entertaining as the stakes get higher. Each time a company reverses a change it wants to make because of user protest, the chances of user protests grow for each subsequent change.

Now if only we could get the mobile carriers, Internet providers, and media networks to react the same way about changes in their plans the way Internet companies do.