This quick guide will explain why some files open with the wrong app on the Galaxy S7 and how to fix it. This is a setting called default apps. Most have probably seen it before, but quickly hit OK or dismissed the popup. Default applications are what automatically open when you try to view a website link, download a PDF or listen to music.

If you’ve ever tried to open a webpage or installed a second music player, you’ve seen the “set as default application” popup. Telling the Galaxy S7 which app you’d like to use to perform that specific task. However, often times owners select the wrong thing, and from then on the phone opens the wrong application.

Read: 10 Common Galaxy S7 Problems & How to Fix Them

Once you hit ok or the “always” button on the popup it automatically uses that app every time. So instead of opening Google Chrome, you get Samsung’s web browser. Or instead of playing a song in Google Music, something else opens instead. It’s a frustrating problem that many don’t know how to fix. Especially with PDF files. We’re here to help. Read on for more details and instructions to clear default apps on the Galaxy S7. This works for any and all Android devices. 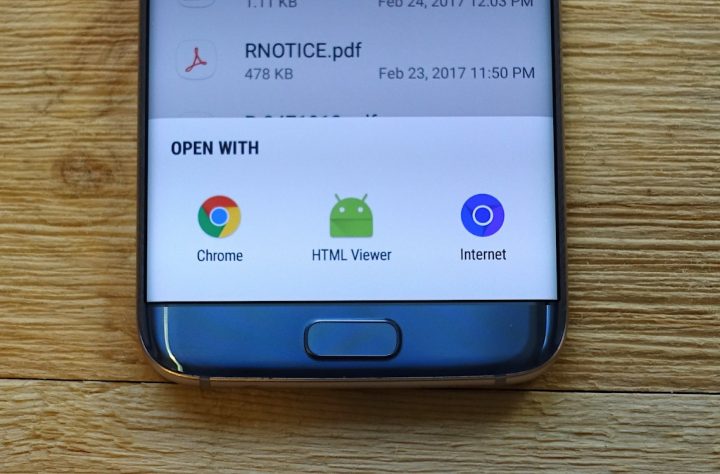 Allowing users to select different apps or services for content is nice, and shows Android’s flexibility, but it also causes problems. Above is an image of three different apps all able to open a PDF or HTML file. However, if you select the wrong one you’re out of luck. Hitting back and trying to select something else won’t work. It will now default to the app you chose the first time around.

If you download a new Twitter app, use VLC to play videos off an SD card, or are often viewing PDF files, you may need to switch back and forth between different apps. Before the update to Android 7.0 Nougat we were able to choose to use an app “once” or “always” but now it’s all or nothing.

So, if you’ve opened content with the wrong app and now it continuously automatically opens stuff wrong, we need to fix it. This is what’s called “clear defaults”. This can be done on an app by app basis too. Meaning we can clear what we need and keep the rest.

How to Clear Default Apps on the Galaxy S7

Setting a default app is the easy part. Just choose one from the popup and you’re done. Clearing that setting so you get a choice of what app opens next time around, isn’t so simple. You’ll need to head into settings and manually remove the default app controls for any app giving you problems. Whether that’s a launcher, video or music player, Google Drive, PDF viewer and so on. 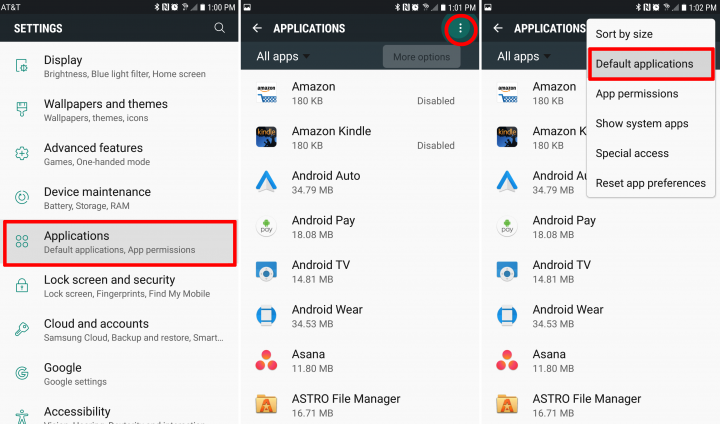 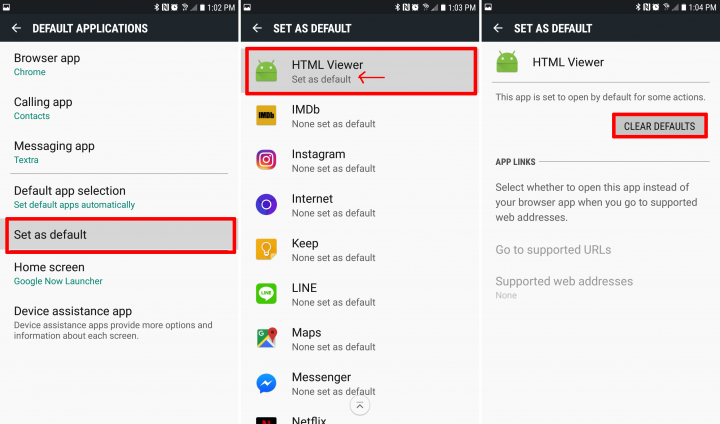 The images above should give you an idea of what you’re looking for. When in the list of default applications underneath each app it will either say, “None set as default,” or, “Set as default.” The latter means the app has been set by you, and may need to be cleared.

Once you’ve followed the steps above that particular app will no longer open automatically like before. Now, when you try to play a song or view a PDF the initial pop-up will appear once again giving you a choice of what app it should use moving forward.

The process is the same for any and all apps. Simply go through and clear the defaults for any app that’s causing problems and you’re all set. Next time around make sure to choose the right one to prevent further issues. The old method of using an app “Once” or “Always” is no longer available, so get used to clearing default app settings on the Galaxy S7. While you’re here, take a look at these 45 other Galaxy S7 tips and tricks.