How to Close Apps on the Nexus 6P

This quick guide will explain how to close or clear running apps on Google’s impressive Nexus 6P smartphone. It has a big and beautiful 5.7-inch screen, amazing dual front-facing speakers, and plenty of power, but sometimes it’s good to close running apps. It’s still a fast phone, but for those wanting better performance and more battery life, try the steps outlined below.

Doing things as simple as closing any running apps may seem so general and simple for average users, but it isn’t easy for everyone. Users switching to Android from an iPhone, or trying the Nexus 6P and stock Android over a previous Samsung device with a different software interface, you may need to learn how to do a few things.

Read: How to Delete Your Nexus 6P Browser History

A lot of Nexus 6P owners are first-time Android users, or have always used something from other Android manufacturers that don’t offer stock Android. We get asked a lot of questions, and this is one of them. Closing or clearing all running apps is easier than most think, and in many cases can have positive results. Read on for the quick instructions, what apps you should close, and when.

With a powerful 8-core processor and 3GB of RAM the Nexus 6P runs great, and it has a big battery. That doesn’t mean we can’t improve things though, so that’s what we’ll be doing here today.

The general “rule of thumb” on Android is to let the operating system manage your memory, rather than users closing apps themselves. The Nexus 6P is plenty fast, but lets make it even better. Not to mention there are actually a few instances where clearing apps can improve performance and battery life.

Android does an excellent job managing apps unlike any other operating system by putting apps in a low-power state in the recent apps menu, ready to be opened when needed, and saving battery the rest of the time. With Android 6.0 it’s even more aggressive with something called “Doze” that sleeps apps, but keeps them ready to open when needed. That said, some are worth closing or killing.

Closing running apps or clearing them out of memory and the recent apps menu on the Nexus 6P is actually extremely easy, and only takes a few taps. All the buttons are right on the screen, and it takes just a tap and a swipe. To the right of the middle (round) home icon is a square-shaped button that brings up recent apps. This is where we need to be.

This is the multi-tasking menu key that brings up all currently open or running apps. For those that didn’t know, switching from YouTube to the Browser, then Gmail, and back to YouTube is fast and easy using this button. Many Android users never use it, but it’s there and waiting. This same area is where all open and running apps (even in the background) are located. Simply swipe to clear them. 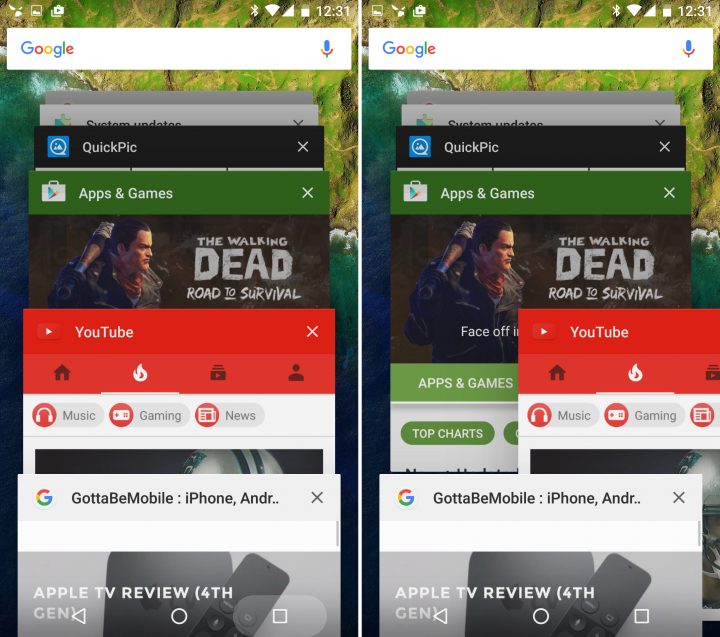 The image above shows the bottom right button which opens the rolodex-style card view of all currently running apps. There is no clear all button like some Samsung’s or others, so swipe away one or two, or all of them one at a time.

A quick swipe of your finger on each app will instantly close that application. Any saved progress or website you may be on will have to reload next time you use that specific app, or be gone completely. The image above shows the menu, and me swiping to clear YouTube (right side). That’s it, you’re all done. It is that simple to close apps on the Nexus 6P and most stock Android phones or tablets. 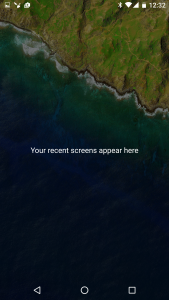 Once you’ve cleared all apps, it will show the screen above, confirming all apps are closed. Clearing the SMS text app or phone dialer only means it will need to restart on your next incoming message or call, wasting battery and processing power. So only clear things you won’t use. Big intensive apps like Maps, Navigation, or games you can close, but we’d recommend keeping the rest open and let Android do the rest.

Read: How to Speed Up the Nexus 6P in Seconds

Again, only close what’s necessary, which is why we’d recommend users just swipe away single apps one at a time they won’t be needing anymore, and leave everything else running in the background. Android 6.0 Marshmallow is very fast and efficient, and puts apps into an even deeper sleep state than ever before, so closing apps isn’t all that important these days. The only time we’d recommend killing all apps, would be at work, at night before bed, or if you won’t be using the phone for several hours.