How to Get the Verizon Galaxy Nexus Update

Many owners of Verizon’s device have been experiencing bugs since the launch back in December. 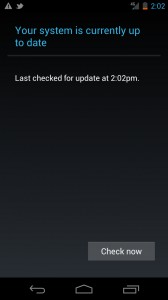 Well, many people (myself included) have become impatient with the speed of the roll out. Fortunately, there is a way to try and attempt to pull the update.

Discovered by Phandroid, the method seems to be working for many people. Here are the full instructions on how to try and get the update this moment:

For some, this method has worked. Others have had to try this multiple times in order to get the update. Some have even switched up the order.

Personally, I haven’t been able to get this method to work at all but I can confirm that it has been working for some people. I will also say that it’s worth trying out, especially for those that are dealing with a host of bugs.

Verizon has not said how long the roll out will last so it could be quite a bit of time before all Galaxy Nexus owners see the update arrive.