The Apple AirPods work well with Apple devices. However, you might not know that they will also work as a basic pair of Bluetooth earbuds that can connect to any Bluetooth device like an Android phone or tablet or a computer. We’ll show you how to connect to your Android phone or tablet so you can use your AirPods with more than just Apple devices. 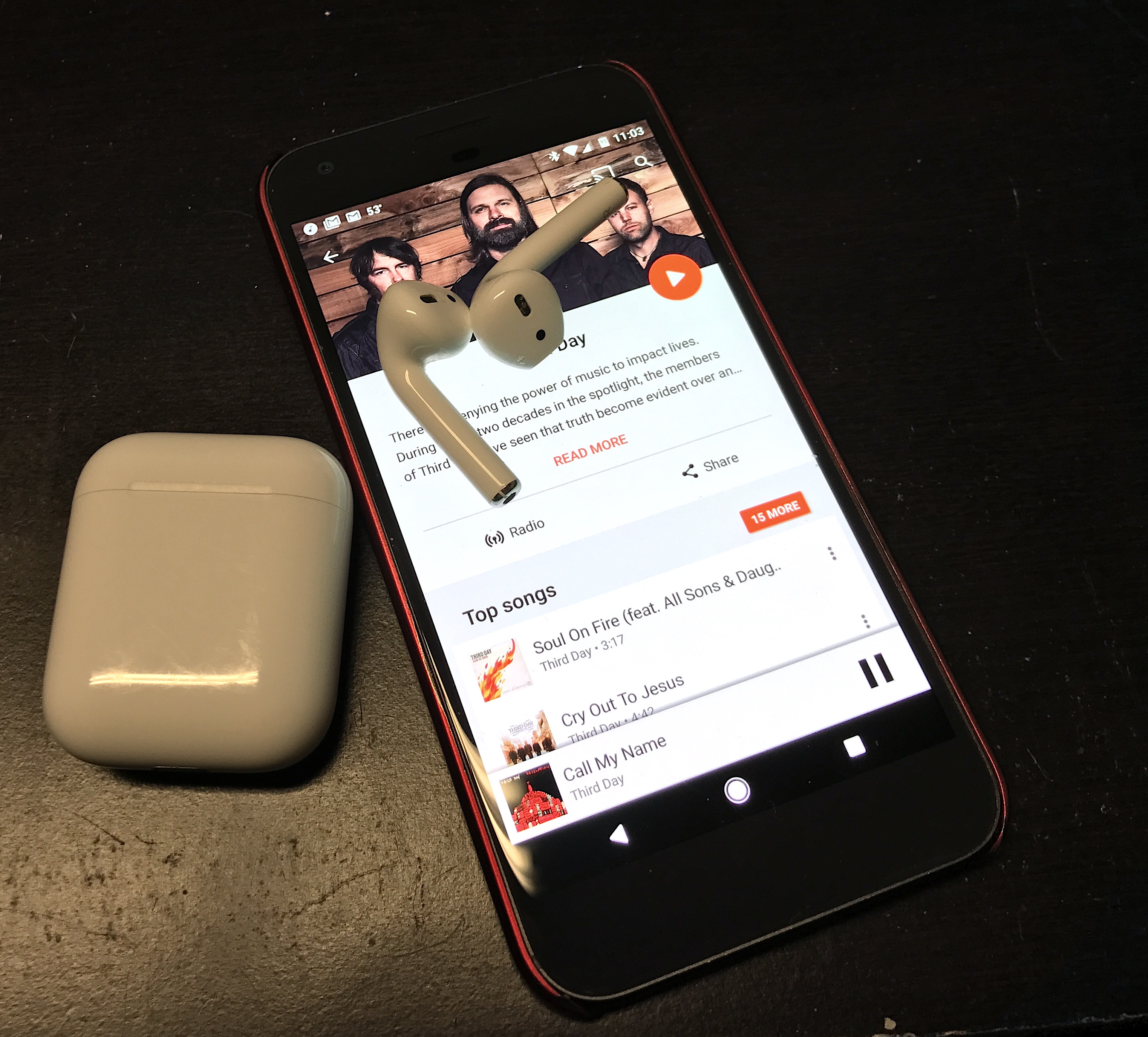 People may wonder why anyone would want to connect their AirPods to an Android device. Plenty of people carry two phones, one for personal use and one for work. Others own an iPhone and want AirPods to use with it, but they might also own an Android tablet, like a Galaxy or Fire tablet. Plenty of people own both an iPhone and a Windows PC or a Chromebook. Thanks to the Bluetooth radio on the AirPods, these devices can pair with Apple’s headphones.

Prepare to Pair with Your Android Devices

To get started, turn off Bluetooth on your Apple devices paired with the AirPods to keep them from interfering. The iPhone, iPad or Mac might not cause problems, but it’s best to end the interference just in case. 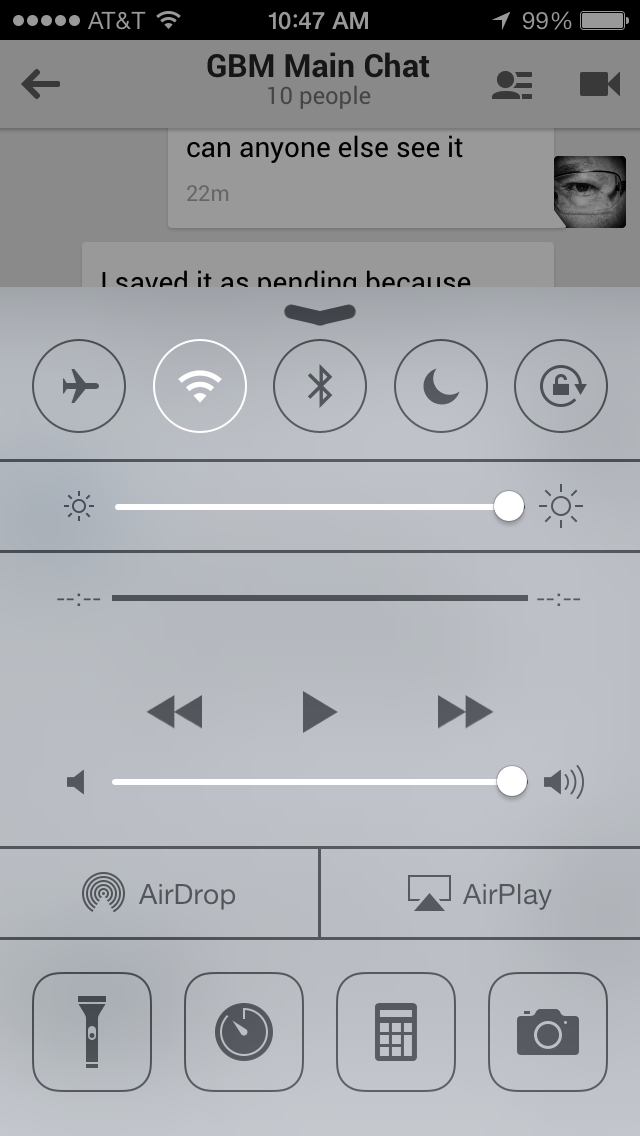 The easiest way to turn off Bluetooth on an iOS device is to swipe up from the bottom of the screen on your iOS device. This shows the Control Center. Tap on the Bluetooth icon (center icon in top row of the pop up) to turn it off.

How to Pair with an Android Device

Now we’re ready to pair the AirPods with an Android device. Not all Android devices look or work the same. The following steps show how to connect to a Google Pixel running Android 7.1.1. However, the steps should work similarly on most other phones.

On the Android device, swipe down from the top of the screen to show the Notification Area. You should see the settings icon in the upper right corner of the area (see the image above). Tap it and then choose Bluetooth. Make sure the Bluetooth radio on your phone is on (see arrow in left image below). There’s a switch at the top of the screen usually. Make sure it’s in the On position. 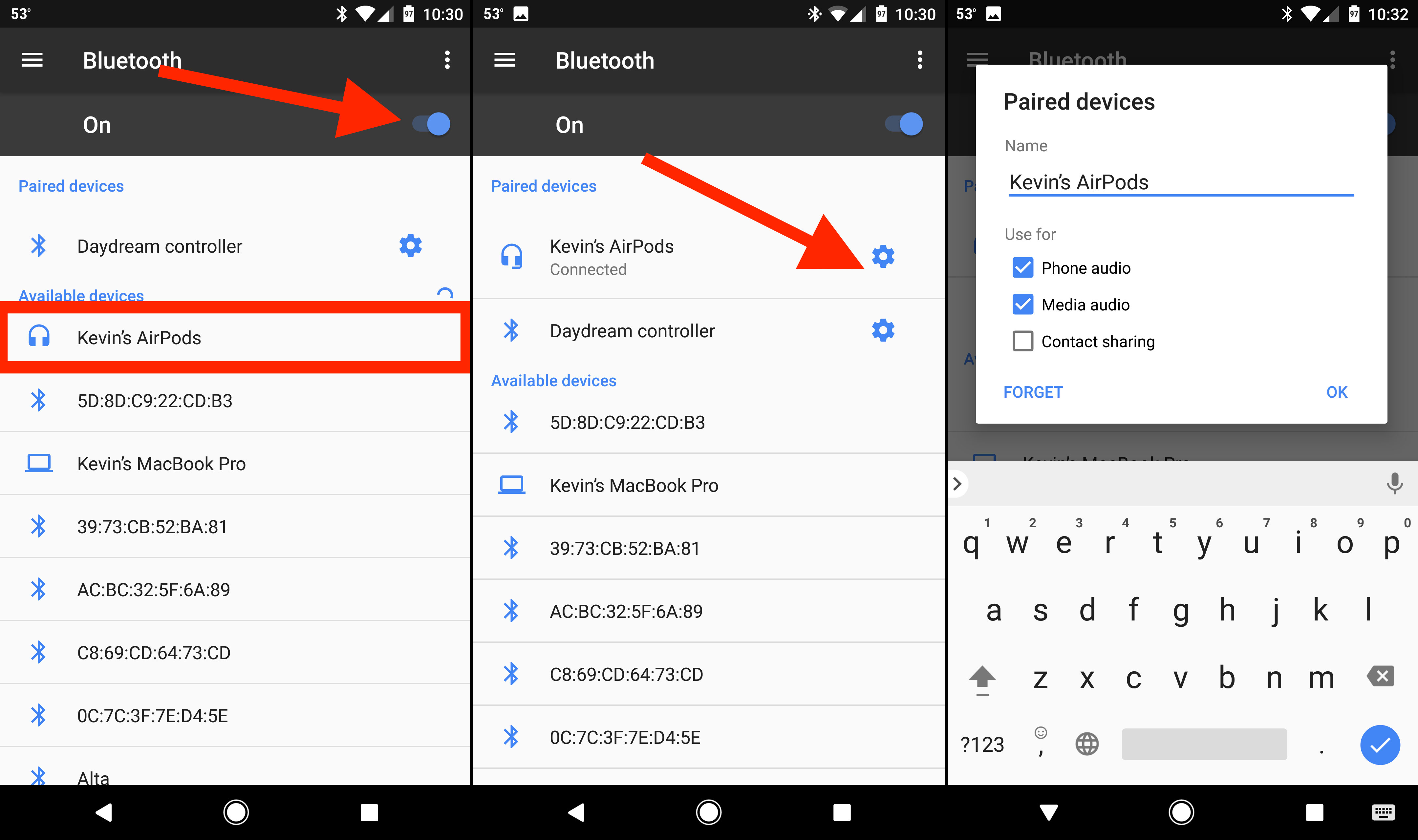 On the back of the AirPods, there’s a tiny button. Press and hold it for a few seconds. You may need to turn Bluetooth off and then on again for it to show up. I had to try a few times for the AirPods to show up in the list of Available Devices on my Google Pixel XL. When it does, tap on it. It will connect and the volume bar might show up at the top of the screen.

A settings icon will probably show up next to the listing in the Paired Devices section of the Android Bluetooth settings screen (see arrow in middle image above). Tap it and turn on or off things like Phone audio, Media audio or Contact sharing (see right image above). The first two will tell the phone to play phone or media audio through the AirPods if there’s a check mark next to them. The audio plays through the device’s speakers if not. The last one doesn’t work with the AirPods since they only play audio. Some headphones will store contacts and this setting allows those Bluetooth speakerphones or headphones access to the phone’s contacts list. You can also rename the headphones if you want.

What Works and Doesn’t Work Connected to Android?

Some things that work with an iPhone won’t work with an Android device. For example, taking the AirPods out of your ears won’t pause audio unless you put them into the carrying/charging case. Putting them back in your ears will automatically reconnect to the phone like they do with an iPhone. This only works if they were last connected to the phone. If you disconnect them from the Android device and then reconnect them to an Apple device, they will automatically reconnect with the Apple device.

You can use Ok Google or the Google Assistant, Google’s alternative to Siri. Audio responses will come through the headphones.

You can listen to audio and double tap the side of the AirPods to pause the music or play again after pausing. You can tell the Google Assistant to “Play BAND OR ARTIST NAME from Google Play Music” and it will open the app and start playing the artist/band.