Learn how to switch from iPhone to Android with this easy guide. Using a new tool from Google and a few easy steps. Android is extremely popular, and many are switching to the Pixel XL or Galaxy S7 Edge. Luckily for iOS users Google recently updated their quick switch tool.

When Apple released the iPhone 6 and iPhone 6 Plus in 2014, they also offered an official set of instructions to help users switch from Android. A short while later Google did the same. However, as 2016 comes to a close Google now has an official easy iPhone to Android transfer tool.

Over the years many have moved from iPhone to Android, but for those who haven’t out of fear of losing your pictures and music, Google has you covered. An updated Google Drive app now does everything for you automatically. Read on for more details. 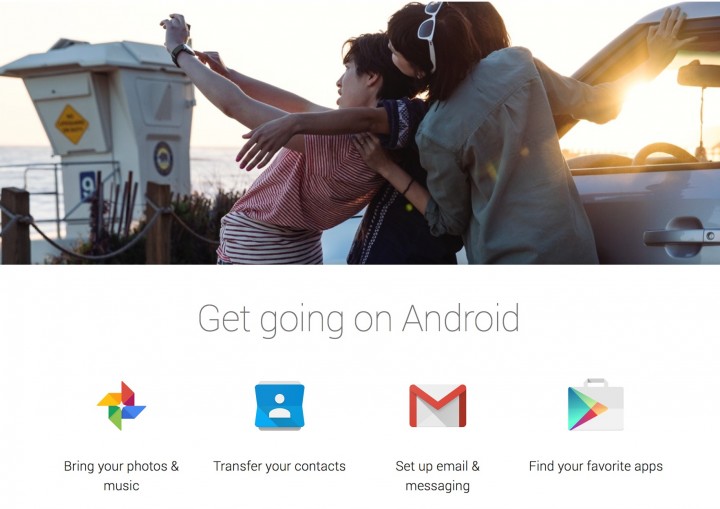 With an impressive new 5-inch Google Pixel and 5.5-inch Google Pixel XL, iPhone users have similar sizes directly from Google that are available. It’s one of the best smartphones ever made, and still sold out almost everywhere. Whether this is your first Android or you are coming back to the platform, we’ll help you transfer everything.

Simply head to Android.com/switch and follow the easy steps provided by Google. Back in 2014 it was tedious and involved using Google Photos, and a bunch of work-arounds. That’s no longer the case. Apple will probably never let Google publish a “transfer tool” on iTunes. As a result Google has built this feature right into the popular Google Drive application for iOS. It’s still similar to the old method, and doesn’t backup text messages. However, everything else of importance will be moved over.

Switch from iPhone to Android

So you’re ready to make the switch. You’ve gone to Google’s site and downloaded the Drive app. Now, just head into menu > settings > backup and follow the instructions. Essentially Google backs up any and all iOS contacts, calendar information, then photos and video. 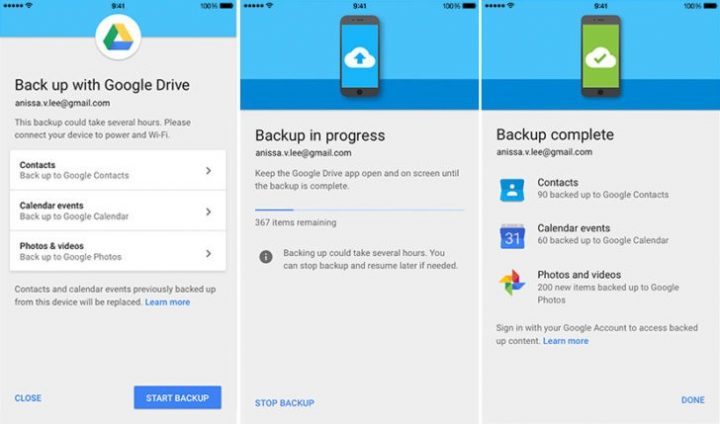 There are just three steps. Click each one as shown above and follow the instructions. You’ll be done in no time. Essentially all information is stored on Google Drive in the cloud. Each corresponding app will have your iOS data. Photos and video are uploaded to Google Photos, which will take the longest depending on the amount. Contacts go to Google Contacts, and Calendar information does the same. Basically it puts everything where it should be, and it’s ready and waiting once you sign in and the device finishes syncing for the first time.

Two areas that are missing here are music and text messages. The old Google system explained how to transfer music, but not anymore. However, it’s still extremely easy. Google Play Music allows users to bring over 20,000 songs for free. Simply download the Music Manager program on your Macbook or computer where iTunes is located. Google Music will prompt you to upload up to 20,000 songs to the cloud. These too are now available on any device, or can be physically downloaded on a new Pixel or Android phone.

It’s all pretty simple really. Google is using many of the tools already in place, but has bundled them into one easy place. Essentially Google Drive now has an iPhone to Android transfer tool built-in.

Remember to turn off iMessage before making the switch, but Google mentions that during the transfer inside of the app. Those looking for ways to transfer text and picture messages from iPhone to Android should click here.

It’s also worth mentioning that Google’s new Pixel and Pixel XL have another system entirely using the cable provided in the box. It is an all-in-one solution that’s even easier. So if you bought the new Pixel XL, forget all of this and use the dongle included in the box.

Good luck with the transfer, and enjoy your new Android smartphone.