The HTC M7 launch date has unsurprisingly been pegged to be taking place on February 19th, the same date that HTC will host launch events in the United States and the United Kingdom. If true, it means that it, like the Galaxy S4, will be shunning a launch at MWC.

Earlier this week, HTC sent out invitations to two launch events set to take place on February 19th ahead of MWC 2013 in Barcelona. The invites, for events in London and New York City, were not for anything in particular with HTC refusing to divulge any official details. The product that is most likely to launch at this event is the HTC M7, a device that has long been rumored to be replacing the HTC One X. And according to a new report, it looks like the star of the show is indeed the HTC M7. 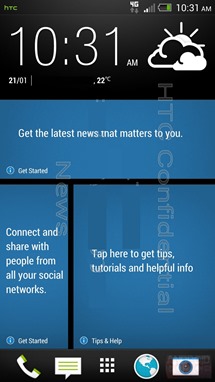 A new report from Focus Taiwan claims that the HTC M7 launch date is set for February 19th. The publication cites corporate sources who claim that the company will indeed show off its new rumored flagship. This isn’t a surprising revelation given the rumors swirling about the HTC M7, but it is further confirmation that the product that HTC plans to show off in a few weeks is indeed the HTC M7.

The device was previously rumored to be launching at Mobile World Congress 2013 in Barcelona, the same event that HTC used for the HTC One X launch, but like Samsung, it appears that the company will be using its own flagship event instead.

There isn’t any word on when the device might be released though reports suggest that the company is targeting March 8th for a launch in Europe. No specific date has been mentioned for a launch in the U.S. though given that the company is likely launching the device in both Europe and the U.S., we don’t imagine the U.S. launch date is too far behind.

The HTC M7 is rumored to be partnering up with AT&T, Sprint and T-Mobile at launch with the Verizon model evidently delayed, potentially to space out its launch and that of the Droid DNA which arrived in November.

Its main rival, the Samsung Galaxy S4, is rumored for a late March launch with an April release date.