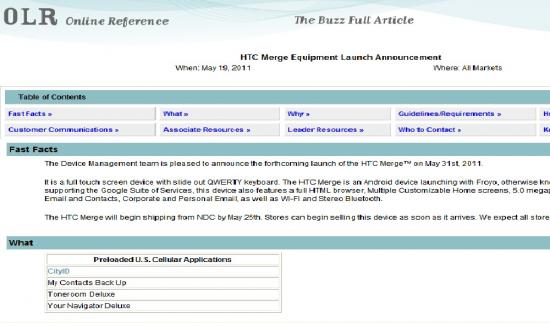 U.S. Cellular may be launching the HTC Merge on May 31st after some initial delay. The handset was at one point also rumored to be coming to Verizon Wireless, though neither HTC nor Verizon have announced a timeline or date for launch. The device is a world phone Android smartphone with a landscape-oriented sliding keyboard that will compete closely with the T-Mobile G2 and the Sprint HTC EVO Shift 4G–all three devices are made by HTC.

The domestic CDMA and international GSM Merge has been available on Alltel, and when it arrives on U.S. Cellular, the world phone will cost $250 before a $100 mail-in rebate and with a two-year contract.