Are you ready for 4G LTE to hit HTC’s Android smartphone? If you are and are itching to grab an HTC Thunderbolt, Verizon Wireless is featuring a page on its website for you to track thunder and is promoting it on its homepage. The device is expected to launch on St. Patrick’s Day in the U.S. on March 17 and will provide mobile broadband data speeds of up to ten times faster than 3G data, according to the carrier. 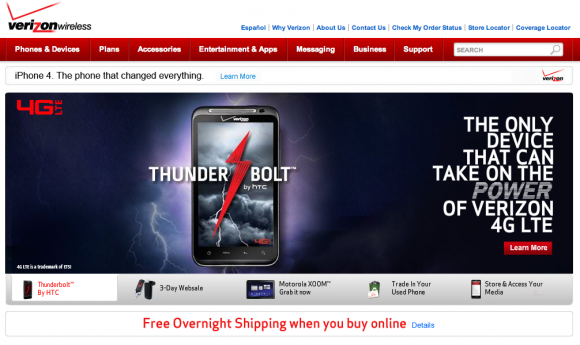 The HTC Thunderbolt was first announced and seen at CES where we had our hands-on with the device earlier in the year at the trade show. However, since the announcement, the device has been delayed several times, creating a lot of hype, speculation, and frustration for those who are ready to join the 4G data revolution.

So how fast is 4G data speeds? On a USB modem through Verizon’s 4G LTE network–the carrier currently only offers 2 USB data modems–I was able to get average download speeds between 10-15 Mbps, far in excess of the quoted 5-10 Mbps speeds quoted by Verizon. In the San Francisco Bay Area, known for data traffic congestion, I managed to get upload speeds between 2 to 8 Mbps.

HTC’s Thunderbolt won’t be the only device on Verizon’s network. The carrier’s saying lightning will strike ten times! In addition to four smartphones–the Thunderbolt being one of them–there will be a netbook, notebook, several mobile broadband routers, an upgrade to the Motorola Xoom tablet, and another USB modem that will be able to take advantage of 4G data on Verizon’s nascent next-generation data network.

Best of all, with the HTC Thunderbolt, the competitive advantage of simultaneous voice and data maintained by AT&T is gone as on 4G, Verizon’s slowly enabling that function.