As part of the company’s re-design and new mantra, thin is very in at HTC. After having announced that the company will be designing its future smartphone lineup to feature slim profiles, HTC had also announced that it would be abandoning physical QWERTY keyboards on its smartphones. While the news makes sense given Android’s and Windows Phone’s–both platforms HTC supports–offer excellent software auto-correction and Windows Phone’s auto-correct engine is among the best in the industry, it is a definite shame for those who may favor a physical keyboard over a touchscreen-only experience on a smartphone. 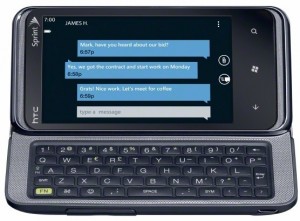 Pocket-lint reported that HTC had announced at a Seattle, WA event that hardware keyboards are on their way out. The move may seem surprising for HTC, which had numerous phone models equipped with keyboards in the past, but makes sense as Apple had announced in 2007 that keyboards are no longer needed with the iPhone.

When HTC was a Windows Mobile–then Palm PC and Pocket PC–exclusive house, the company had built a name for itself with some great devices with physical QWERTY keyboards. The first smartphone device with a keyboard–the HTC Blue Angel–had a mushy membrane keyboard that slid in portrait mode similar to the webOS-powered Palm Pre. After that, HTC had shrunk down the size of its smartphone from the rather large 3.5-inch display of the Blue Angel at the time and implemented landscape-oriented keyboards which became increasingly popular.

However, since the Windows Mobile era, more modern OSes–like iOS, Android, and Windows Phone–have better touch support and great auto-correct and predictive text engine that may negate the need for a physical keyboard for many users. As such, even the HTC 7 Pro, which was released on Sprint’s 3G Now Network as the HTC Arrive–a phone that ran Microsoft’s Windows Phone 7 platform–became a niche device compared to touchscreen-only devices, like the HTC Trophy and the Nokia Lumia series.

In the past, keyboards–as a result of the BlackBerry dominance–are a thing that enterprise consumers look forward to for messaging and emailing. Are we finally at an inflection point where enterprise customers and consumers are beginning to seek the same things in a mobile computing device and experience?