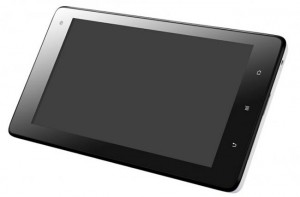 For those who balk at Samsung’s Galaxy S tablet pricing, the Huawei S7 Slim may be a good low-cost alternative, which the manufacturer has promised to be at just under $300 when it will be released. Those at MWC have noted that the Slim moniker is very befitting of the name as the device is just about as slim as an iPhone 4.

Like the Galaxy Tab from Samsung, Huawei’s S7 Slim also suppports 3G HSPA connectivity, with up to 7.2 Mbps on the download side and up to 5.76 Mbps on the upload side along with WiFi b/g/n connectivity. However, U.S. users beware as the device doesn’t seem to support U.S. 3G bands for AT&T nor T-Mobile connectivity, though the quad-band GSM/EDGE radios will still give you a slower 2G connection.

Huawei is also using outfitting the S7 Slim with a 7-inch capacitive touchscreen, unlike the cheaper resistive touchscreens that are common with tablets in this price point. That means that you don’t have to push in hard, like the iPhone and a number of higher-end Android devices, to activate the screen, though you won’t be able to use the screen with gloves on in cold climates.

However, to keep the price at under $300, the S7 Slim will utilize a lower resolution screen of WVGA–the same that’s on the Dell Streak 7 on T-Mobile. Like the Dell Streak 7, there are only 3 Android navigation buttons–rather than the 4 found on many Android phones as the Search button is eschewed on this model.

The device is said to run Android 2.2 with a Huawei skin, though some reports on the Internet says that the Huawei S7 Slim may ship with the newer Android 2.3 OS.

The device is expected to launch in April.