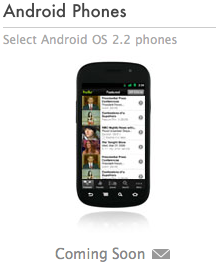 Hulu Plus, a staple of the few streaming video apps on iOS, is coming soon to select Android devices. Though a specific launch date wasn’t specified, Engadget reported that one of its readers had spotted the Hulu Plus service on a Google Samsung Nexus S smartphone, which runs Android 2.3. The image found on Hulu’s website came with verbiage stating that the subscription-based streaming TV service is “coming soon” to “select Android 2.2 phones.”

The late launch of the Hulu Plus on Android may be due to DRM restrictions, which is a similar experience that Netflix is facing as it tries to port its subscription-based movie streaming service from iOS to Android. As Android doesn’t have a system-wide DRM mechanism, individual phone manufacturers will need to implement tools to prevent piracy and prevent copyrighted streaming materials from being saved directly onto the phone. As such, it appears that neither Netflix nor Hulu Plus will make it to all Android devices and it is yet to be seen which Android 2.2 smartphones will get either or both services and which will be left out, further leading to the problem of Android fragmentation.

Despite Android 2.2 Froyo supporting Adobe Flash, the devices cannot play Hulu content straight from the website. When trying to load a video, the Hulu service detects that the Android browser is a mobile device and rejects the user. The Hulu Plus subscription service will help to remedy that problem, but only on select Android 2.2 devices.