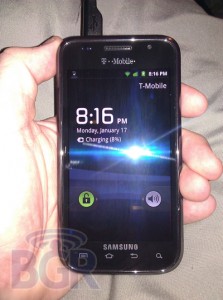 A leaked image of the Samsung 4G for T-Mobile USA’s 4G HSPA+ network was revealed and the picture shows that the Vibrant 4G may skip Android 2.2 Froyo in favor of the newer and more current Android 2.3 operating system, also referred to as Gingerbread.

While the original Vibrant, a Galaxy S series smartphone, was released with Android 2.1 with Samsung’s proprietary TouchWiz user interface on top of Google’s mobile OS, that device is said to still be awaiting a software update to Android 2.2. Speculations on the Internet have it that Samsung is withholding the Android 2.2 update for the original Vibrant in favor of trying to push more of the updated Vibrant 4G hardware out the door with what was believed to be an Android 2.2-based Vibrant 4G.

With this latest leaked image from BGR, that may not be the case and could potentially suggest that the Vibrant’s Android 2.2 firmware update with TouchWiz integration is still undergoing testing at either Sasmung or T-Mobile. Sources tell BGR that the Vibrant 4G has an unlocked screen that is reminiscent of Gingerbread’s. The early device is said to be devoid of Samsung’s TouchWiz UI at this time, though Samsung may add it in later for launch, which is slated for February 9.