Intel, Telefonica, and Samsung are have announced that they’ll be making strategic investments in Expect Labs, a company that hopes to use its research to extend the speech capabilities of mobile devices and provide predictive search results even without the user asking for the search.

The investments, all three of which originated from their respective company’s investment arms, are meant to bolster Expect Lab’s cash on hand as they move to better interpret user’s conversations to deliver predictive results based on speech context.  According to the company’s website, using two years of research and development, the company hopes to create a platform that can understand conversations and speech in real time.  This involves, signal analysis, language analysis, predictive text modeling, and a service that can grasp information fed to it in real-time like photos, social graphs, documents, emails and videos. 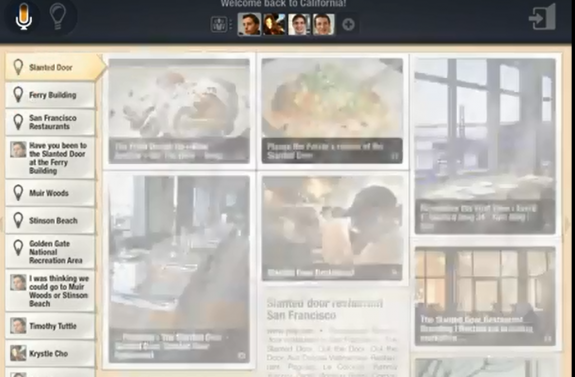 A screenshot of an application powered by Expect Labs’ ACE

So far the most high profile product the company has been working on deals with anticipating what users will do next. That produced, dubbed ACE or Anticipatory Computing Engine, is meant to help predict what users will do, in real-time.

If feasible that kind of technology would immediately have large ramifications in the smartphone industry where the specification wars of the past few years have been replaced by a battle in which each manufacturer attempts to create new ways in which their device might make the lives of users easier.

For example, Samsung’s newest flagship, the Samsung Galaxy S4 is billed by the company as a “life companion.” According to the company, the device’s mission is to make life for users “richer, simpler and more fun” by integrating into the life style of the user. One way it attempts to do this is with its included software like S Translator, a language translation application for which real-time translations could be an improvement.

The technology could also improve the responses and quality of S Voice, another application included on Samsung’s latest device. It acts as a personal assistant much in the way Apple’s Siri does for iOS. Currently, S Voice is powered by technology developed and owned Nuance’s Vlingo. In addition to improving S Voice’s responsiveness, Samsung could be planning to move S Voice’s technology to something that it has a financial and organizational stake in.

For its part, according to Intel has already hinted that it would be using ACE to create “sophisticated voice controls” to ultrabooks. Google also owns a product similar in function to what both Siri and S Voice do today. Dubbed Google Now, that technology was just made available to iOS users this week. Google Now, like Expect Labs’ products, offers predictive search through your online activity, including prior Google search results, Gmail inbox, Google Calendar notifications, and location. Expect Labs, which doesn’t have access to this user data in the same way that Google does, will try to leverage real-time conversations for context in trying to predict and deliver similar search results.